Techopian Weekly - As a matter of interest, Meta matters 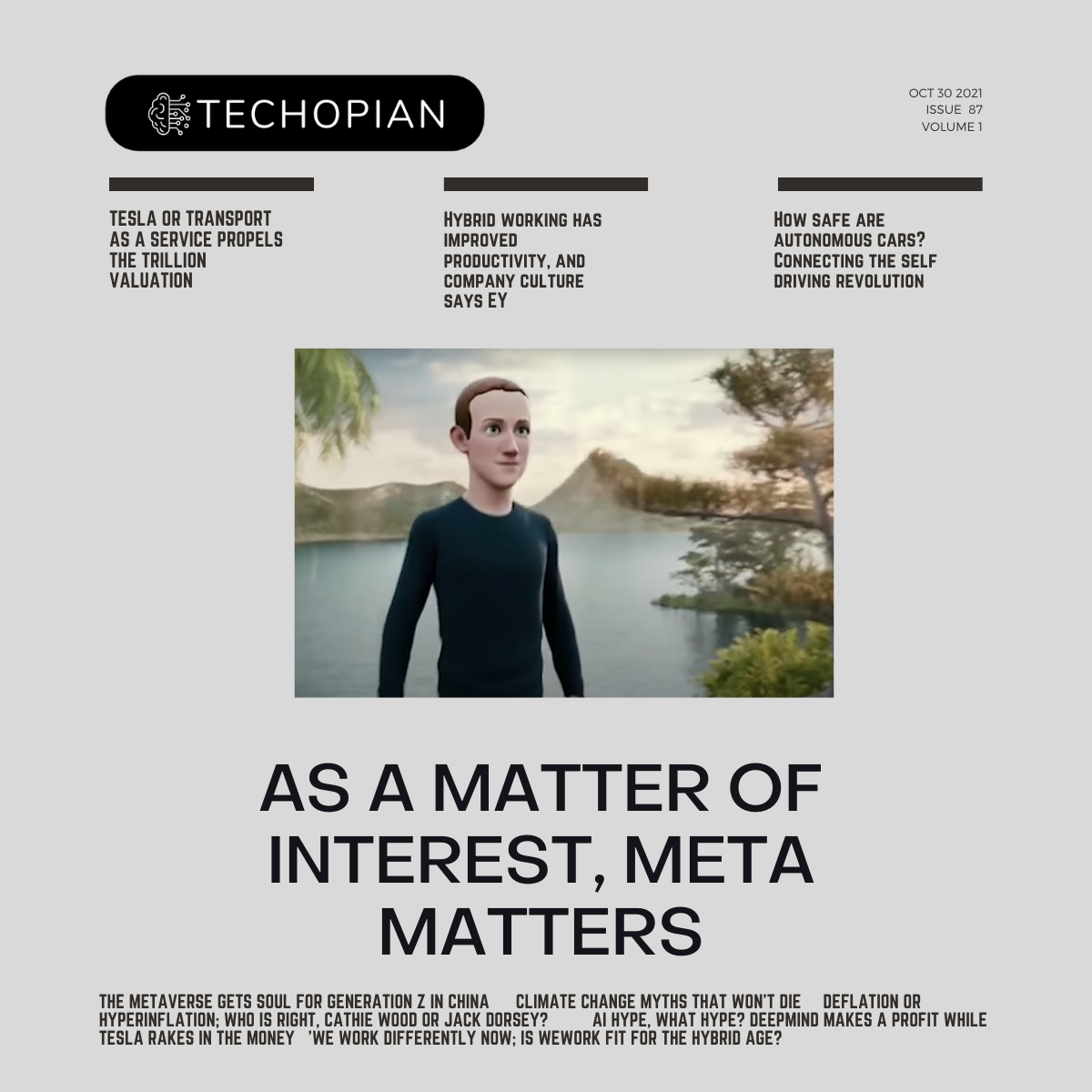 As a matter of interest, Meta matters
Tesla or transport as a service propels the trillion valuation
Hybrid working has improved productivity, and company culture says EY
We work differently now; is WeWork fit for the hybrid age?
The Metaverse gets soul for generation Z in China
Climate change myths that won't die
Deflation or hyperinflation; who is right, Cathie Wood or Jack Dorsey?
How safe are autonomous cars?
Connecting the self driving revolution
AI hype, what hype? DeepMind makes a profit while Tesla rakes in the money

As a matter of interest, Meta matters

Zuckerberg's vision behind Meta and the Metaverse is not as foolish or cynical as it seems; the Meta model is incredibly bold and could catapult the company to the top of the league table of the world's biggest companies.

Tesla or transport as a service propels the trillion valuation

Back on October 20th, an article on Techopian asked: "Are Tesla shares cheap?" Well, would you believe it, a week later, the shares were up around 20 per cent.

How about that for prescience on a grand scale? Or do you think it was a fluke? If you promise to keep this to yourself, dear reader, we confess it was probably a fluke. But hey, we predicted it.

When the upfront cost is high but the running cost low, folks look to share and pay as they go. This is why the cloud model is so successful— it has transformed IT, turning it from an overhead to a variable cost, something you can turn up and down like a tap. Software as a Service (SaaS) has likewise become the standard way most of us buy software. Maybe movies and box sets on demand are much the same — isn't that why Netflix has taken off, and video sales crashed to near zero.

And it is happening with electric vehicles.

According to a survey from EY, hybrid working has led to increased productivity and improved company culture.

We work differently now; is WeWork fit for the hybrid age?

As WeWork joins the stock market, we ask, is its model coming into its own in the hybrid era?

WeWork once valued at $47 billion, had onlookers scratching their heads. Some had serious doubts concerning the management style of co-founder Adam Neumann, others just noted the rows of empty desks and wondered if the WeWork business model was, well…was working. Then there was this thing called money — WeWork was losing money faster than free beer!

A few commented on the odd description of WeWork as a tech firm — as it's obviously more bricks and mortar than silicon — so why the extraordinary valuation for a company that was losing billions of dollars every year? For SoftBank, it has been a sorry tale. It is thought that the Japanese tech investment fund has sunk around $18.5 billion into WeWork. SoftBank’s founder and CEO Masayoshi Son has now admitted the investment into WeWork was “foolish". Full article...

The Metaverse gets soul for generation Z in China

The Metaverse is taking off in China supported by an app called 'Soul or Soul Wonderland' but is this what generation Z needs?

It's happening; you might not like it, but a Metaverse social media platform now has 100 million users in China.

The Metaverse is created by an app called Soul and is targeted at Generation Z.

In this Metaverse, your avatar is your identity; you can be anonymous and unrestricted by the social pressures that permeate the real world. You are free to express yourself in any way you like — presumably within certain parameters.

The app was launched in November 2016 in China and passed 100 million users in February 2021. Soul App, the company behind the product, describes it as an intelligent, mind-based social network platform. Full article...

Greta Thunberg, the silly young girl — or so goes the polite version of the narrative. The story goes that Greta Thunberg had a message for the Chinese people: "Greta Thunberg urges Chinese people to abandon traditional chopsticks and thus save trees and forests," went the headline.  The response: "Chinese People's response is to urge Greta to return to school, where she can learn that chopsticks are made of bamboo, which is a species of grass."

This story did the circuit earlier this year, but for some reason, made a re-appearance on LinkedIn in the last few days. And the comments in response went on and on. The polite ones talked about her needing to 'return to school.' Others blamed the parents. Others were altogether more vociferous.

Here is the problem. It isn't true. According to a fact check site, a spokesperson for Greta Thunberg said: "Greta has never made those or related comments, nor has she received such a message." Full article...

Deflation or hyperinflation; who is right, Cathie Wood or Jack Dorsey?

ArkInvest’s Cathie Wood believes deflation is a bigger threat than hyperinflation; Jack Dorsey warns of hyperinflation. Who is right?

And let’s face it, Jack is not alone. Everywhere we turn, we hear the “inflation is back, and it is going to get worse” meme. The evidence of rising prices is everywhere.

Consider the case for surging inflation: three factors are at play;

· Labour shortages, leading to the likelihood of rising wages

How safe are autonomous cars?

Autonomous cars; when will they take over? What about passenger drones; will they ever be a thing? Well, they could be closer than you think.

Our new video series looks at autonomous cars, passenger drones, and fixed-wing electric vehicles. And if the experts we spoke to are right, you might be surprised by how close they are.

The first video in our series looking at the safety of autonomous cars:

Connecting the self driving revolution

The idea of a connected network of vehicles, all knowing exactly where other vehicles are at any given time is not new. The rail network provides us with the model but cars are different, aren't they?

In this video we spoke with analysts and experts to uncover some of the challenges that autonomous transport faces and take to the skies with the latest advancements in 'pilotless' air travel.

AI hype, what hype? DeepMind makes a profit while Tesla rakes in the money

DeepMind, the AI unit at Alphabet, has made its first-ever profit while Tesla more than quadrupled profits and increased revenue at a time when rivals saw revenue fall.

Okay, there is more to Tesla than AI, and most of its profits came from car sales in the latest quarter. What one can say is Tesla is an example of what digital transformation can do; whilst rivals, wilting under supply change issues, compounded by their long planning process, suffered, Tesla adapted. While rivals waited for supply issues to be fixed, Tesla changed designs. While rivals were crippled by chip shortages, Tesla re-designed chips to take greater advantage of what chips were available. Tesla pivoted while rivals were static: the hallmarks of a company that gets digital transformation. Besides, AI is an important part of its customer offering; its automation features a key selling point. Full article...