Deflation or hyperinflation; who is right, Cathie Wood or Jack Dorsey? 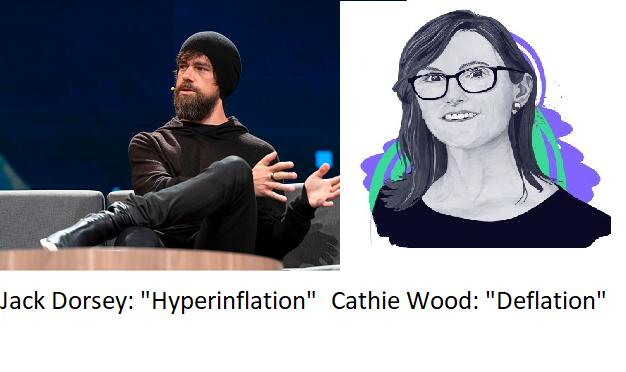 ArkInvest’s Cathie Wood believes deflation is a bigger threat than hyperinflation; Jack Dorsey warns of hyperinflation. Who is right?

And let’s face it, Jack is not alone. Everywhere we turn, we hear the “inflation is back, and it is going to get worse” meme. The evidence of rising prices is everywhere.

And consider the case for surging inflation: three factors are at play;

· Labour shortages, leading to the likelihood of rising wages

Demand and supply and the Weimar Republic

If wages increase in tandem with rising prices, then demand may continue to exceed supply and inflation sets in. This is what happened in the 1970s.

In Germany in the 1920s, under the Weimar Republic, inflation turned into hyperinflation. There is a view that Weimar hyperinflation led to the rise of Hitler. That may not be true, but if it is, the link is convoluted.  The truth is hyperinflation ended several years before Hitler came to power. It is more likely that it was the reaction to hyperinflation which sowed the seeds for the rise of the Third Reich.

There is an alternative point of view.

This alternative idea was expressed articulately by Cathie Wood on Twitter on October 25th.

Cathie Wood is the founder of ArkInvest, and the ArkInvest Innovation ETF has seen spectacular returns over the last seven years, although they have evened off a bit in recent months.

We would describe Cathie Wood as a Techopian, not because of her support for Bitcoin, but because of her belief in exponential technologies and disruptive technology, which underpins the Ark ethos.

She suggested three reasons for her belief in deflation:

First: Technology innovation will lead to lower costs. She Tweeted: “Artificial intelligence (AI) training costs, for example, are dropping 40-70 per cent at an annual rate, a record-breaking deflationary force. AI will likely transform every sector, industry, and company during the 5 to 10 years.”

Second: disruptive technology will lead to creative destruction. She Tweeted: “Since the tech and telecom bust and the Global Financial Crisis in 2008-09, many companies have catered to short-term oriented shareholders who want profits/dividends now. They leveraged their balance sheets to pay dividends and buy back shares, “manufacturing” earnings per share. They have not invested enough in innovation and probably will be forced to service their debts by selling increasingly obsolete goods at discounts: deflation.”

Thirdly: she says what inflation pressures there are primarily cyclical, meaning they are one-off, which will ease once bottlenecks ease.

Here are some observations:

While not exactly at the cutting edge of human advancement the lumber price might be a good bellwether. Between October 2020 and May of this year, the price of lumber (measured per thousand board feet) increased from around $526 to $1.670. It was the surge in lumber that initially kicked off many of the inflation predictions. However, the price is now at $667.  The lumber narrative goes like this: it was one of the first commodities to experience bottlenecks, and consequently, one of the first to benefit from their eventual easing.

Cathie Wood also talks about the deflationary effect of technologies such as renewables. She Tweeted: Oil has had three sources of support on the SUPPLY side. Global oil DEMAND is below that in 2019 and is unlikely to return to its old high, partly because its price has broken a string of lower highs and is above the $77 hit in 2018, therefore destroying demand.

“On the supply side, ESG (environmental, social, and governance) mandates have forced energy companies to shift capital spending from mature fossil fuels to nascent renewables. Meanwhile, banks have deprived fracking companies of funding after their near-death experience in 2020.

“In response to the near quadrupling of oil prices since the low last year, electric vehicle adoption has accelerated, sowing the seeds of a serious oil price decline longer term.

Let’s end with what is perhaps the most important point.

There is a simple equation: P/T = MV. It means average price times number of transactions equals the amount of money times the velocity that the money changes hands.

There isn’t an economist in the world who doesn’t believe this equation is correct, although many disagree on how relevant it is.

Right now, the M part of that equation is surging, thanks mainly to the activities of central banks.

However, the V part of that equation has been falling. Indeed, the falling velocity of money has been a characteristic of the last 25 years and is probably the underlying reason for ultra-low interest rates.

Why has V been falling? Probably because globally, we have seen something of a savings glut. The reasons are manifold. The rise of China, where savings are exceptionally high, is a factor. Germany too, which tends to export more than it imports, subtracts from global demand. Poor growth in wages relative to growth in corporate profits is another factor. Companies often used profits to fund dividends rather than investments. Demographics has been another factor as countries age.

Will we get inflation, hyperinflation or deflation in the long-run? To answer that, look at money growth; productivity growth will affect the number of transactions and growth in velocity.

The money supply is rising, no question of that; this is a force for inflation.

Whether you believe productivity will grow probably depends on your view of technology; if you agree with Peter Theil that the rate of technology change is slowing down,  then you probably believe inflation is about to become a dominant theme of the 2020s. On the other hand, if you believe technologies such as AI will lead to a surge in productivity, then that is a reason to believe inflation will reverse in a couple of years.

One interesting observation is that this year the fall in the velocity of money appears to have slowed. This is a trend worth watching.