Even if it's a bubble, we should celebrate surge in number of unicorns 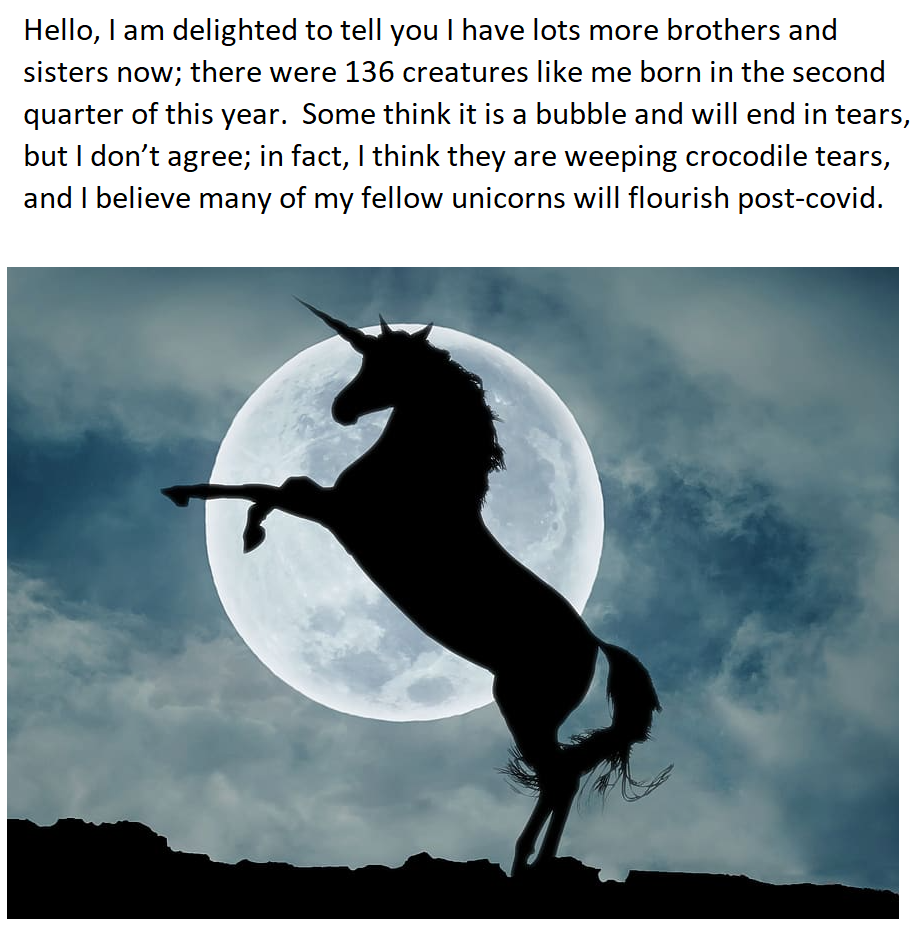 Even if it is a bubble of unicorns, we should celebrate record number of new billion-dollar companies

Who said unicorns were extinct? According to Finbold, the first six months of 2021 has seen an extraordinary rise in their number. For example, Q1 of 2021 saw the highest number of billion dollar companies ever, with 113 of these supposed mythical creates grazing the corporate grasslands, compared with just 21 in Q1 2020. But it appears, unicorns are like rabbits, and the numbers grew at an even faster rate in Q2, up to 136 from 23 a year ago.

The last time there were this many unicorns was before the great flood, when they were thought to have gone extinct because none made it onto Noah's Ark! At least that is the conclusion of this research.

According to Finbold, "Between Q2 2016 and the second quarter of this year, the number of companies to attain a billion-dollar valuation grew by 871 per cent. However, during the period, the least number of unicorns was recorded in Q4 2016 at 10."

It said: "Most of the unicorns that emerged amid the pandemic capitalised on the newfound urgency of online integrations. In general, the pandemic has accelerated the adoption of online technologies. However, the companies had already recognised the need to shift online before the health crisis ushered in clients and investors."

It is hardly surprising to learn that companies that capitalise on "online integration" did well during the pandemic. Maybe we should not be surprised to learn that this has resulted in a surge in billion-dollar businesses.

But is the number of unicorns sustainable? How many unicorns have valuations rooted in realistic financial projections, and how many have ridden a bubble make of euphoric investors who don't know where else to spend their money?

It is easy to be cynical; it is clear that not all unicorns will keep that status in the long term, and there are similarities with the dotcom bubble.

But then bubbles are not necessarily bad things. In his book, Pop! Why bubbles are great for the economy, Daniel Gross argued that the telegraph wire and railroads booms of the 19th century in the US were bubbles but which helped make America the country it is today. During these booms, bubble drunk entrepreneurs, motivated by greed and maybe desperation, saw opportunities unfold for great riches, but many ended up bust. Yet, they left a legacy, an infrastructure that helped catapult America into becoming the world's largest economy.

The dotcom boom may have ended in crash, but the wild frenzy of the late 1990s helped accelerate the development of the Internet.

Would Amazon be the company it is today without the dotcom boom?

Even investors who piled money into dotcoms would have done well if they had spread their money over many companies and had included Amazon, Apple, and Nvidia in their portfolio— all three companies were trading on the stock market in 1999.

Yes, you can take a glass is half empty approach and say the surge in the number of unicorns is a bubble — but the result will be a further acceleration in digital technologies, increased productivity and a stronger economy than would otherwise have been the case.