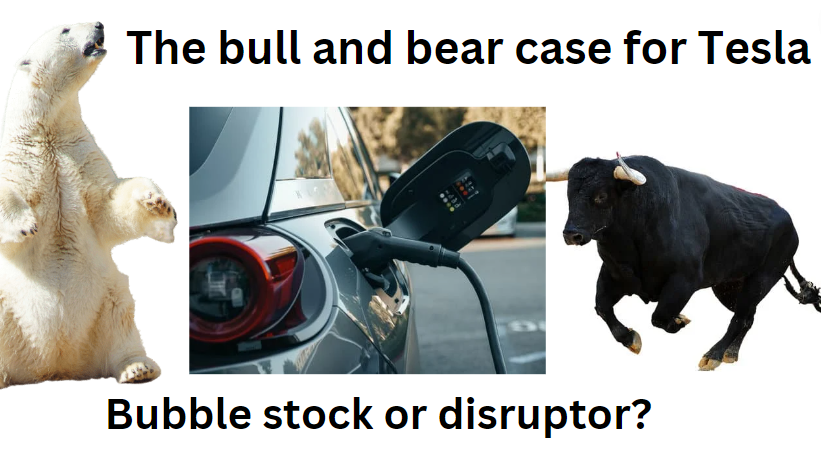 Reasons to be bullish or bearish on Tesla — is the Tesla share price bubble over, or is Tesla still a disruptor?

And so we see two schools of thought. One school says that Tesla has lost its key advantage over rivals.  The other school of thought say no; Tesla remains several years ahead of the opposition; it is a disruptor; it is to traditional auto makers what Apple was to Nokia, Blackberry and Motorola.

Who is right? Let's look at the arguments.

The bearish case — reasons to think Tesla is overvalued?

"The auto industry has embraced electric vehicles (EVs), and now Tesla is just one of the pack. There is no inherent reason it should do better than the rest; it is just one of many. Okay, maybe it will remain one of the market leaders, but even after recent falls, the markets still value Tesla at $375 billion, which is crazy. Volkswagen is valued at $73 billion, GM at $51 billion and Ford at $51 billion. In Q4 of 2022, Tesla sold 343,000 vehicles.  Volkswagen sold 6.2 million. In Q3 Tesla saw a revenue of $21.45 billion,  between them Volkswagen, GM and Ford saw a revenue of $150 billion. How can it possibly make sense for Tesla  to be worth more than twice these three companies combined, when it saw a seventh of their revenue?"

An excellent piece on Seeking Alpha expresses the case against Tesla extremely well.

You can summarise the key points as follows:

· Tesla was the poster child of the recent tech bubble, analogous to techs during the dotcom boom. It states:  "History shows that buying the dip during the collapse of a bubble is not a good strategy, history tells us that Tesla will eventually return to a stock price that reflects the true value of the company, and that price is significantly lower than its current $350 billion market cap."

· Recent sales were lower than expected, and despite price cuts, there is a Tesla inventory of 70,000 cars.

· Lack of evidence that Tesla has any inherent advantage in battery technology; for example, "there is no reason to think that it will be in any way superior to GM's Ultium, BYD's blade battery or CATL's Quilin battery," says Seeking Alpha

· Finally, there is software. Tesla has been investing heavily in full self-driving mode, but that is years away from being market ready, and it doesn't have any other inherent software advantage over rivals.

The implication, Tesla's production rate is now higher than the order rate.

"In 2022, BYD sold twice as many battery electric vehicles in China as Tesla.

"Tesla is still the global leader, but BYD is starting exports to Europe and Australia soon. Tesla needs to move quicker with new tech and models."

The case for Tesla — the bullish view on Tesla.

Before we get started, let's make a couple of general points.

Just as Tesla has had its fans, it has had no shortage of haters.

Three years or so ago, Tesla's big plan was to produce  5,000 vehicles a week.  And 'industry experts' galore laughter about it — impossible, they said. Well, Tesla did manage it, perhaps a few months late, but no more. Now, look at it. The company is producing more cars in a little more than a day than just a few years ago people said was impossible in a week.

Or take Tesla profits — not so long ago, critics said, "oh sure, it is producing cars, but only by making a loss."  Yet, for the quarter ending September 2022, the Net Income at Tesla was over $3 billion. Gross profit was over $ 5 billion; revenue growth has been phenomenal.

So, when we read reasons to be critical of Tesla, bear the history in mind — there always are critics who have been repeatedly proven wrong.

So the trick then is to look beyond the views of those who just come up with different reasons to critique and consider whether there is a deeper, more objective reason to criticise Tesla.

It is a good company. Let us agree on that, but does it deserve its extraordinary valuation?

Does Tesla deserve its valuation?

Tesla's P/E ratio is 37. That may seem high but not extraordinary — not so long ago, the ratio was around 200. Before the recent crash in the share price, its P/E was over 90.

A P/E of 37 does not seem excessive for a company with such rapid growth. But to justify it, growth must continue.

According to this piece: by the end of this year, one in three new cars sold in the U.K. will be electric. The same article predicts that BEVs global market share will increase from six per cent in 2021 to nine per cent in 2022 to 50 per cent mid-decade. With growth like that, Tesla would have to lose market share dramatically, not to carry on growing rapidly.  It will surely lose market share, but will it lose share to such an extent that its sales growth will fall significantly whilst the industry it dominates grows rapidly?

Tesla has certain advantages and one emerging disadvantage.

First of all, compare its profitability with rivals. In the quarter when Tesla's net income topped $3 billion. GM saw net income at a similar level but from much higher revenue — around three times higher. So Tesla's margins are good.

Secondly, consider an inherent difference between EVs and ICE cars.

Electric vehicles have fewer moving parts than internal carbon combustion engine vehicles. The manufacturing process is entirely different. This is why Tesla was able to confound sceptics with its rapid production growth.  For traditional car makers, with their complex supply chains, adjusting to a different production method is difficult, very difficult and can avoid massive disruption. Tesla does not suffer from that legacy.

Tesla also has a more vertically integrated business — this is partly a consequence of the less complex manufacturing process of EVs.

Tesla was busy building this vertically integrated business whilst rivals were sitting on the fence about EVs. And Toyota was still banging on about hydrogen cars

This vertically integrated business is important for several reasons:

· Control over chip design, creating a massive advantage at a time of chip shortages.

· Control over EV charging points — there are 40,000 Tesla EV charging stalls globally.  As USNews points out, this is a significant reason to own a Tesla.

· Software advantage — consider, for example, how the last CEO of Volkswagen was fired over issues with the software. By the way, read this Reuters article to see just how much the previous Volkswagen CEO, Herbert Diess, admired Tesla. Or take this Tweet: "The development of own software expertise is the biggest switch that the automotive industry has to make – much bigger than the transition to e-mobility, our CEO @Herbert_Diess says in the live-dialogue with the citizens of #Wolfsburg."

Finally, there is talk of a 25,000-dollar Tesla in 2024  If this proves right, it is extremely hard not to argue that Tesla sales will continue to increase rapidly.

But there is a problem with the above bullish case for Tesla, and that problem is Elon Musk himself. There are several core issues:

· He has been selling Tesla shares to fund his purchase of Twitter, dragging the share price down. This whole saga was poorly handled.

· Is his time now too diluted — has the Twitter episode meant Musk has taken his eye off the Tesla ball?

· Tesla's core demographics up to now have been left-leaning, relatively wealthy consumers with concerns about climate change. Musk seems to be alienating this demographic.

There is a fourth, less obvious issue, too — ESG, particularly the S part of ESG. Musk works his staff extremely hard. Is this sustainable? Might they migrate to auto industries with more staff-friendly practices?

I would say that Tesla remains an auto industry disruptor — it is several years ahead of most of its competitors. Its biggest threat comes from BYD in China, and CATL is the leading battery manufacturer. Whilst Tesla partners CATL, so do other auto companies.

It may be time, however, for Tesla to find a new CEO.