Techopian Weekly -Smartphones are smarter than you think 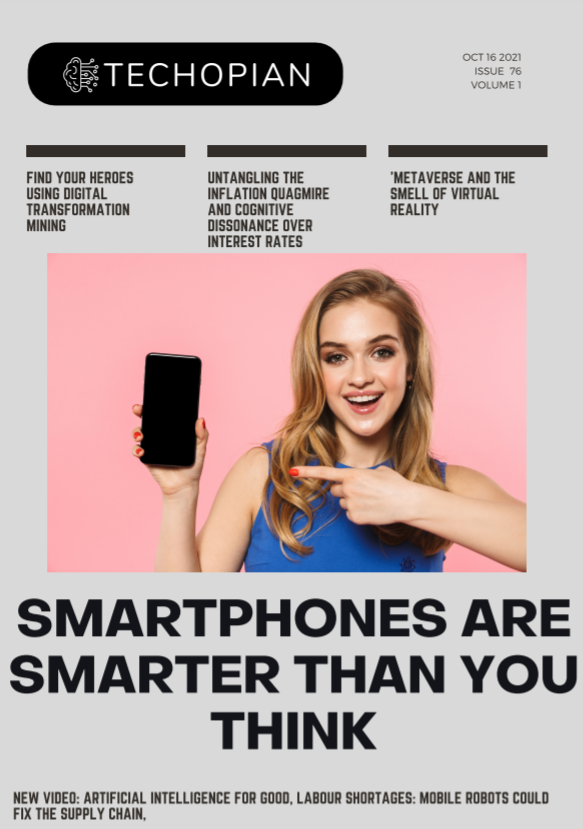 Smartphones are smarter than you think
Untangling the inflation quagmire and cognitive dissonance over interest rates
New video: artificial intelligence for good
Find your heroes using digital transformation mining
Metaverse and the smell of virtual reality

Smartphones are smarter than you think

For an agonising ten minutes last week, I thought my smartphone had gone caput. I was out enjoying some autumn sun, and it just stopped working, the screen as blank as an amoeba's brain. I tried turning it off and on again, but with a blank screen, that was impossible. Then I heard it ring. Okay, I thought, something is working, alas I was unable to reply.

I guess I am not alone — maybe everyone reading this can empathise with me on that occasion — our smartphones have become so important to us.

It is strange, though, despite the miracle of touchscreen phones, economic performance since they began to gain popularity has been appealing. Productivity has been especially awful. During the 2010s average growth annual growth rate in productivity in the UK was just 0.3 per cent.  The UK had it worse than most other advanced economies, but poor productivity growth was a problem across the developed world.

If you work in technology, you probably marvel at its advances; you probably believe that the pace of change is accelerating, yet as far as the economy is concerned, very little has changed.

But those who cite this as evidence technology change is overrated overlook an important point. And that point is time-lags.

For example, the significant impact of electricity in the United States came about 40 years after Thomas Edison first distributed electrical power in New York in 1882, following the widespread redesign of American factories.

"It is highly likely that AI will eventually become to be seen as a classic GPT technology and eventually deliver the much-needed boost to productivity that techno-optimists envisage once its full potential is realised. However, growth accounting estimates for earlier GPTs show that their impact on productivity takes time to develop," said Prof Crafts from Sussex University.

But isn't the smartphone a general-purpose technology too?

But one of the key enablers of precision agriculture is…yes, you have guessed it, the smartphone.

See this article for more:

Untangling the inflation quagmire and cognitive dissonance over interest rates

Inflation, inflation and one other word, what is it now? Oh yes, inflation. It is all we seem to be hearing about. It will be just like the 1970s say, pessimists.

There is cognitive dissonance over the need for higher interest rates. How can an economic policy designed to make us poorer be a good idea when higher prices are, in any case, making us poorer?

Unless wages go up too, of course.

But what's the truth behind the inflation story of 2021, and do interest rates need to go shooting up to nip inflation in the bud?

This article attempts to answer that question.

We have got a new video out. Peter van der Putten, Director,  Decisioning and AI Solutions Pegasystems, and Assistant Professor at Leiden University in the Netherlands, talks about AI for food.

"If you do not appreciate the high performing staff you already have, then the loss would be even more painful when you see the impact that their departure has on your business," says Sarah Burnett, a contributing author to Techopian and chief technology evangelist at KYP.ai.

And that is where digital transformation comes in: Sarah reckons desktop mining technology can help companies find their heroes.

There is a labour shortage — some of the problems might be temporary down to the pandemic and resulting bottlenecks, but there are deeper forces at play; the baby boomers are retiring, the proportion of the retired population to the working-age demographic has never been higher, and it will rise, globally. Forget the debate about automation destroying jobs; we need automation because there are fewer workers, and it will continue to decrease as the global population ages.

Well, there is good news: autonomous mobile robots are being deployed to improve the supply chain's productivity.

Metaverse and the smell of virtual reality

And finally, there are smells.

Never fear; a company reckons it has worked out how to bring smells into virtual reality.