Newsletter — We need a Metaverse equivalent of HTML 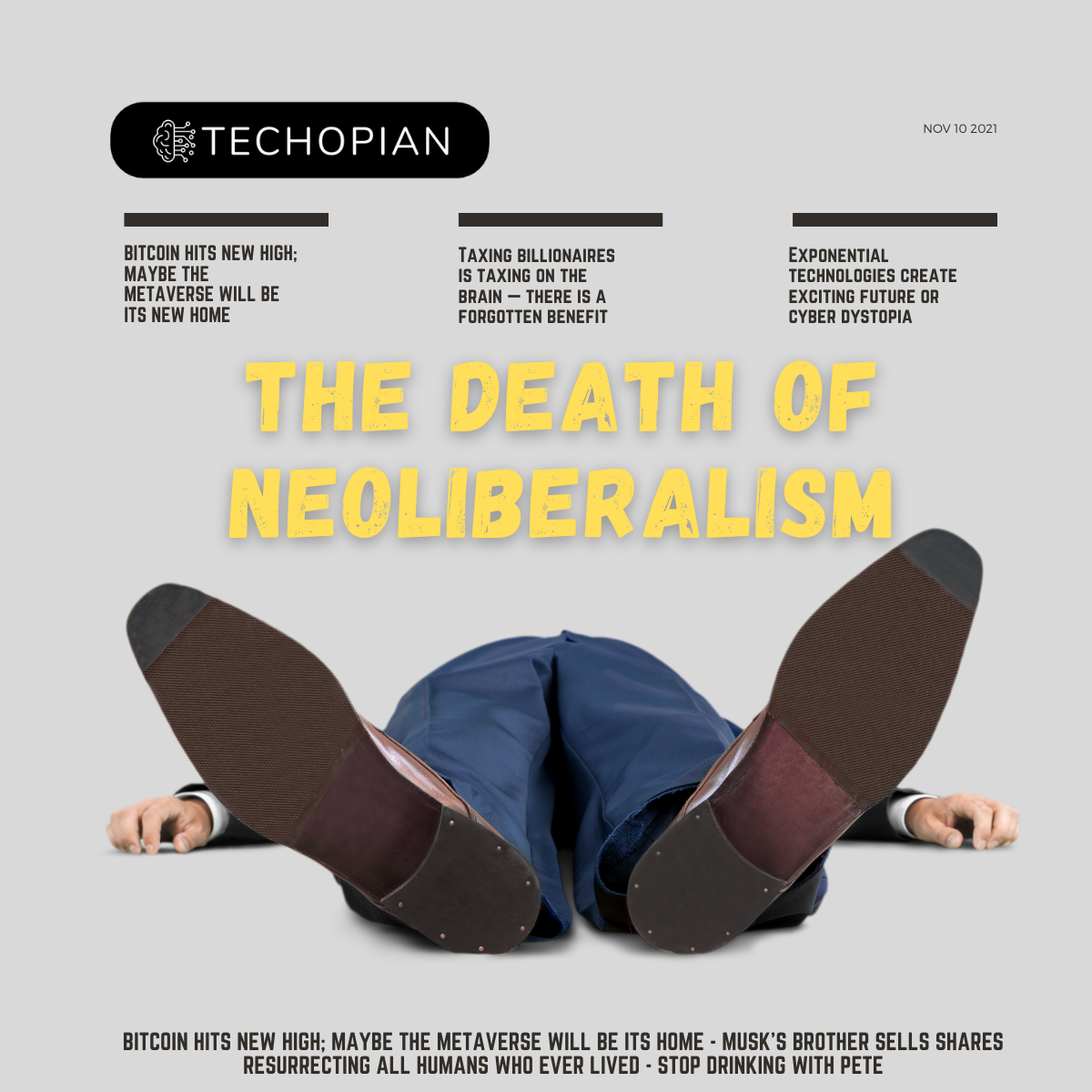 The Metaverse Wild West; we need a Metaverse equivalent of HTML
The death of neoliberalism and the great reset to a third age
Taxing billionaires is taxing on the brain — there is a forgotten benefit
Exponential technologies create exciting future or cyber dystopia
Bitcoin hits new high; maybe the Metaverse will be its new home
Other News: Musk's brother sells Tesla shares, Resurrecting all humans who ever lived, Stop drinking with Pete

The Metaverse is like the Wild West; but just as the Internet is owned by no one and the World Wide Web has HTML, we need common, free and open standards.

The Metaverse will never be like a giant hippy community; but just as in the real world, we own our bodies, breath, smell and see without having to pay for it; obey rules of physics and chemistry — like gravity— in the Metaverse we need common open and free standards, and there must be limits to commercial ownership.

Since the end of World War 2, the West has experimented with two systems, and we saw two ages:

The neoliberal age is either dying or dead, not because it failed, but because times change and what might have worked once no longer worked.

A new age, the connected age, is dawning. It is being charged by:

But the new age won't last long; something even bigger is building.

For the full picture you can see our video exploring the death of neoliberalism and what this 'great reset' might mean:

Elon Musk is in the news yet again, this time over his share options, but then the whole issue of taxing billionaires is complex, and if you believe in a shareholding democracy, there is a benefit. Jump into the thinking in the article below ...

The exponential growth of modern technology has brought abundant future possibilities, along with cybersecurity challenges," said Dr Victoria Baines, cybersecurity futurist. As we rush towards a fast emerging realisation of what was once science fiction and only existed as a fragment of the most fervent imaginations, the importance of building this new world with security at the heart of the design is critical to its success.

Bitcoin hits new high; maybe the Metaverse will be its home

The Bitcoin price has hit a new all-time high, but maybe Bitcoin will really come into its own in the Metaverse.

Now Kimbal is at it too. Elon Musk telegraphed plans to perhaps (which means probably) sell Tesla shares across the world via Twitter. But it turns out Elon's brother, Kimbal Musk, has been selling Tesla stock too.

So far, $200 billion has been knocked off the company's valuation, which is now valued at a mere $1.01 trillion — mind you, it is still 17 per cent up on when, two weeks ago, we asked the question are Tesla shares cheap?

Resurrecting all humans who ever lived

"One day, we might be able to bring back to life every human who ever lived, by means of science and technology.  And it will be a good day," states a paper by RomanS.

It looks at four methods to achieve this:

But once all these minds have been created, where will we put them? It seems the Metaverse will be the place.

And finally; there is bad news for whisky drinkers who want to save the planet.

So if you like your Scotch and want to do your wee bit to save the world, you might want to ditch Pete and find a different drinking buddy.