Disruptive innovation technologies to be worth $200 trillion + by 2030, what does this mean? 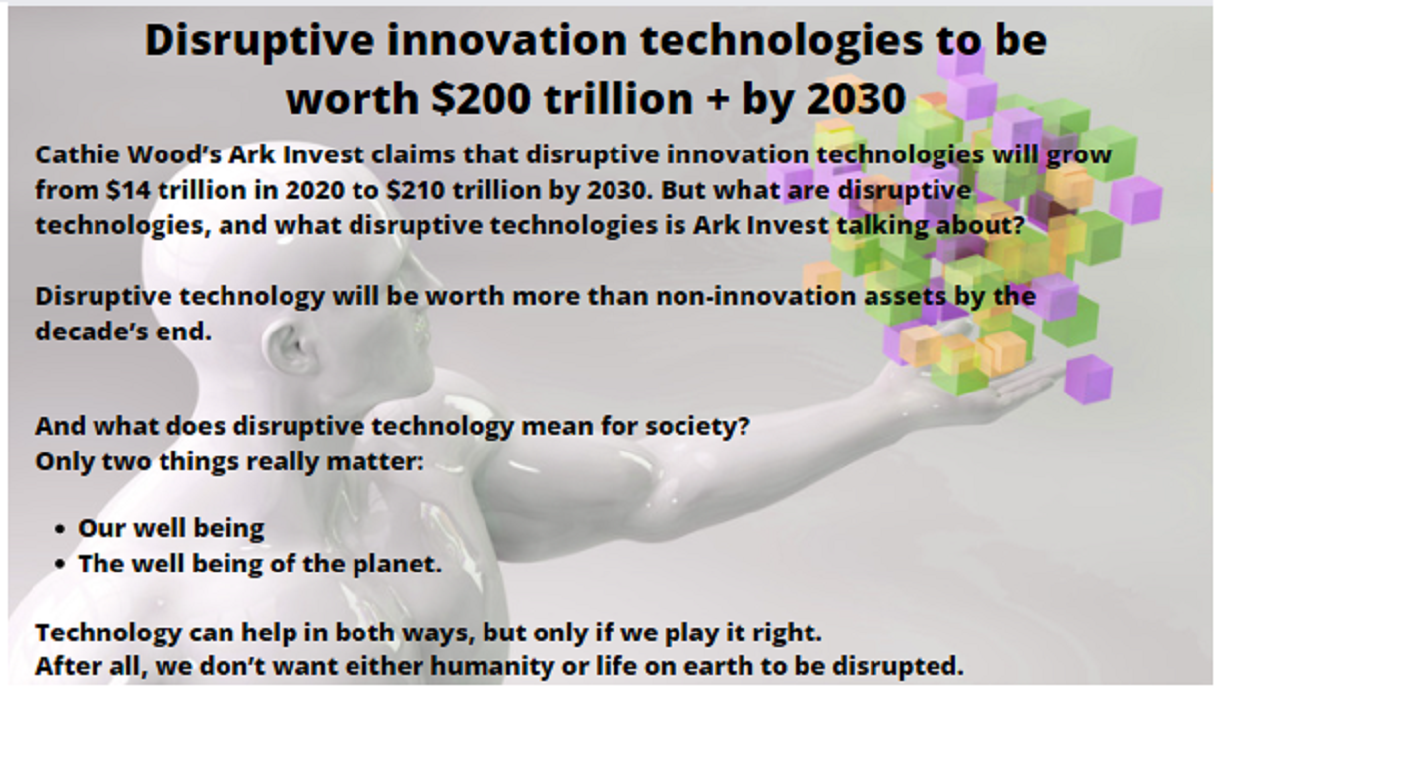 Suppose it was the year 2000 and you got a message from the year 2012 and it said that in that year more photographs would be taken that year than in any previous year in history, but PC sales would fall. What would you do? It is tempting to conclude that you would have bought shares in Kodak and shorted Apple. But, in fact, at around 2012, Kodak entered Chapter 11, and Apple became the biggest company in the world. That’s my definition of disruptive technology. Or, to put it another way, disruptive technology changes an industry or multiple industries virtually out of recognition; it is hard to predict and often decimates existing market leaders. Of course, it doesn’t have to fulfil all those conditions — but it usually does.

A naughty child sitting at the back of a class might be called disruptive, but they are not disruptive by the definition used above. That’s why I am not keen on applying the word disruptive to describe Trump.

A theory known as Innovator’s Dilemma describes disruptive technology pretty well. A new technology is often dismissed by market leaders, and when they realise its potential, they find they have left it too late.

Innovator’s Dilemma, which was developed by the late Harvard Professor Clayton Christensen, took the disc drive as a model. It looked at how every time a new type of disc drive emerged, such as 3.5 inch replacing 5.25 inch, there was a complete change in the dominant disc drivers companies, except for IBM.

With disruptive technology, the new technology is often dismissed as little more than a toy. Market dominant players will say, ‘but if we adopt this product, we will cannibalise our own product.’  Famous examples include Blockbusters dismissing Netflix and Nokia and RIM’s (Blackberry’s) failure to anticipate the touchscreen phone.

In other words, disruptive technology will be worth more than traditional technology by the decade’s end.

One piece of advice I heard and which sticks with me is: ‘cannibalise or be eaten.'

Sometimes you can’t do much about a disruptive technology. For example, how could Microsoft have possibly saved Encarta from Wikipedia? Perhaps its best option would have been to buy Encyclopaedia Britannica.

But it does appear we are on the cusp of a disruptive technology explosion.

The obvious example, and which we are seeing happen right now, is electric vehicles. Not so long ago, the idea of an electric car was dismissed as little more than a toy — or an idea that had been tried once and failed. Few consumers wanted one. The leading EV company Tesla was dismissed as a no-hoper. Well, that view was clearly wrong.

But what else is there that fulfils the description of disruptive innovation technology?

In its Big Ideas 2022 report,  Ark Invest says: “We believe that historians will look back on this era as one of an unprecedented technological moment—and they will say: everything changed.”

Ark Invest reckons it has spotted 14 disruptive innovation technologies that will pass tipping points this decade.

Drilling down, it sees

Interestingly, five technologies on the above list could be clubbed together, namely Digital Wallets, Public Blockchains. Bitcoin, Ethereum DeFi and Web3.

Another on that list, EVs are surely passing that tipping point around about now — or maybe already have. At least the technology has; we are just awaiting scale, infrastructure and consumer acceptance which will all happen this decade.

It is also interesting that super materials such as graphene are not on the list — and where are renewables and non-battery energy storage? In the context of batteries, Ark Invest does consider their importance for EVs. But there is more disruption from energy storage than that — grid-level storage is incredibly important. Also, on this topic, there is a vehicle to grid storage when car batteries are also back-ups for the grid — Ark Invest does not appear to mention that.

It is not that Ark Invest does not rate these technologies, but its list seems very blockchain centric. So, for example, if Web3.0, Ethereum, Bitcoin, and public blockchain are described as separate disruptive innovations, why isn’t energy storage or high voltage long-distance transmission on the list?

Quantum computing is also missing from the list, as are brain-computer interfaces, but they are perhaps more technologies for the 2030s.

Gene sequencing is also an example of a technology that could change the world dramatically, but maybe 2030 is too soon, explaining its low projected value relative to other technologies on the list.

Change begins slowly but then….

Ark Invest itself says, “Change appears to happen slowly and then all at once.” And this view is surely right and explains technology cynicism and probably explains the pattern described by Gartner with its hype cycle.

Ark Invest also emphasises convergence which is, of course, incredibly important. So, for example, convergence between AI and energy storage could transform the way we overcome the intermittent nature of renewables to ensure that energy demand and supply are matched.

Productivity is one of the big economic challenges of the age. So how do we grapple with labour shortages which could become even more serious as baby boomers retire?

Ark Invest itself states: “Organisations will increase spending on enterprise software by 42 per cent at an annual rate to $14 trillion a year. If automation boosts productivity by 140 per cent, AI software could increase the output of global knowledge workers at an annual rate of nine per cent to $97 trillion in 2030.”

But of course, robotics, 3D printing, and autonomous cars could also transform productivity.

Not all of the detail in the Ark Invest report may prove accurate, but the general thrust is surely right.

But the challenge lies with what this means for society.

All of these technologies will have a profound effect.

Will they lead to greater inequality? Will technology change allow us to reduce poverty and increase leisure time?

What about climate change?

What role will regulation play? Does such rapid change increase the need for ideas such as ESG, ensuring companies focus on the wider implications of their activities?

But maybe only two things really matter. If technology can’t achieve these two things, we would be entitled to ask; what’s the point.

Does it make us happier and more fulfilled? And will it support the planet upon which we live?

Technology can help in both ways, but only if we play it right.

After all, we don’t want either humanity or life on earth to be disrupted.