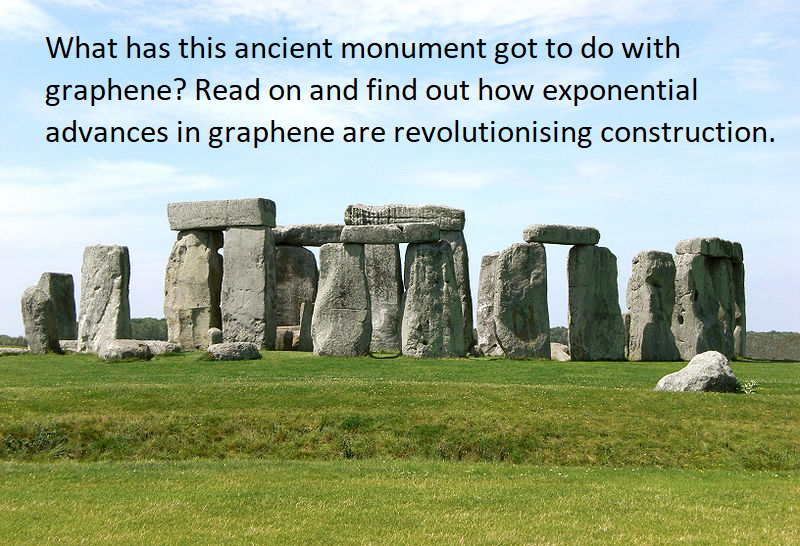 Graphene is set live up to its hype as it passes a tipping point leading to graphene batteries and graphene concrete or concretene.

Graphene was first isolated in 2004 amongst much fanfare, and since then, not a lot has happened. The super material is one atom thick, 200 times stronger than steel, highly flexible, superconductive of both heat and electricity, transparent and….well the list goes on.

There is one snag, the wonder material might make it seem like Wonder Women, its 'super' properties might make it akin to Superman's powers, but both Wonder Woman and Superman are characters from comics, and in the view of many onlookers, the much-heralded potential of graphene is just the stuff of fiction.

The snag with the snag

There is a snag with the so-called graphene snag. The critics are way too hasty. To illustrate this point, see an analogy with carbon fibre. Carbon fibre was invented in the 1950s; it took 30 to 40 years to manufacture it at scale.

It took around 17 years from discovery to scale antibiotics. Given this; why, just why oh why, have cynics been calling graphene overhyped? It was pure naivety to expect graphene to change the world within a few years. Equally, it is cynicism to a degree that feels more like bloody-mindedness to suggest it won’t change the world eventually.

Consider the cost. This graph taken from Graphenea tells the story:

Graphene, just like renewables and energy storage, is benefiting from a learning rate; it is on an exponential function. But if Covid taught us anything, it is that that humans are lousy at grasping the implications of exponential. If you think linearly, and humans are probably hardwired to think linearly and technology is advancing exponentially; then the inevitable result is that you overestimate how quickly it will advance but underestimate the significance of its advance in the future. Graphene critics, just like renewables cynics and just like technology cynics, are trapped in linear thinking.

And what does the falling cost of graphene mean? Here are two examples — concrete reinforced by graphene, for example concretene, and graphene batteries. To reiterate, they are examples, not the sum total of what graphene will be suitable for.

Roughly four and half thousand years ago, our ancestors carted massive stones across Britain and built one of the world’s most enigmatic constructions. Who knows how they really made Stonehenge and what the druids did there. But we can say people have marveled at the construction ever since, gleefully celebrating the summer solstice. Then, on Tuesday 25th May 2021, engineers working for the construction firm Nationwide Engineering did something almost as remarkable on a site around two miles from Stonehenge. They laid down the first graphene concrete slab. Stonehenge was probably built so that the people of that time could worship the sun and stars. The 2021 construction is for another type of worship — in the name of the body beautiful and the great god ‘treadmill,’ upon who we tread with feet encased in only the softest shoes. The graphene concrete block forms part of the foundations of a gym.

“The addition of tiny amounts of graphene – a so-called ‘2D material’ made of a single layer of carbon atoms – strengthens Nationwide Engineering’s new product, Concretene, by around 30 per cent compared to standard concrete, meaning significantly less is needed to achieve the equivalent structural performance, reducing carbon footprint and costs,” states Nationwide Engineering.

So, that’s Concretene — graphene enriched concrete. According to Wikipedia, "graphene acts as a mechanical support, increasing strength by around 30 per cent, and offers an extra catalyst surface for the chemical reactions that produce concrete. It improves bonding at the microscopic scale. The increased strength allows much less material to be used, reducing the carbon footprint (eight per cent of 2021 carbon emissions) and energy costs, although material costs are some five per cent higher, producing a net 20 per cent cost reduction.”

You can even buy graphene by the jar now

According to Construction Index, Skanska Costain Strabag Joint Venture,  which partnering UK firm ChangeMaker 3D  in the use of 3D printing technology to make concrete with microscopic strands of graphene for the HS2 project, “says “the process it is developing…could reduce the concrete used and contribute toward reducing carbon by up to 50 per cent.”

This video provides a good summary of the latest in graphene’s use in construction.

Meanwhile, just as graphene is slowly applied in construction, the world of graphene batteries is getting closer too

Recently a team of researchers from Brown University in the US have created graphene infused ceramic for solid-state batteries. Brown University engineer Brian Sheldon said: “To our knowledge, this is the toughest solid electrolyte that anyone has made to date.”

Now, researchers at Chalmers University of Technology have advanced a sodium battery using graphene. Sodium batteries have one main advantage and one main disadvantage compared to lithium-ion batteries. Sodium is both more plentiful and cheaper than lithium, but sodium batteries have a much lower capacity. “Sodium ions are larger than lithium ions and interact differently. Therefore, they cannot be efficiently stored in the graphite structure,” explains an article on the Chalmers University site.

“We have added a molecule spacer on one side of the graphene layer. When the layers are stacked together, the molecule creates larger space between graphene sheets and provides an interaction point, which leads to a significantly higher capacity,” says researcher Jinhua Sun.”

So there are two potential applications of graphene within batteries — one application could be vital in developing solid-state batteries, which have greater longevity, and faster charging times than lithium-ion batteries, the other to create a much cheaper and environmentally friendly environment kinder alternative to lithium-ion, high capacity sodium batteries.

Just the beginning of graphene

This is just the beginning.

Today antibiotics are so cheap that they are overused. Carbon fibre is now used in wind turbines blades and tennis rackets.

However it will, and those who say it is overhyped might soon be looking up at the sky and asking, “Is it a bird?” “Is it a plane?” To which the answer will come back, “it’s an electric plane with a graphene-based battery and graphene-based wings, about to land on a runaway with graphene reinforced concrete or concretene.”