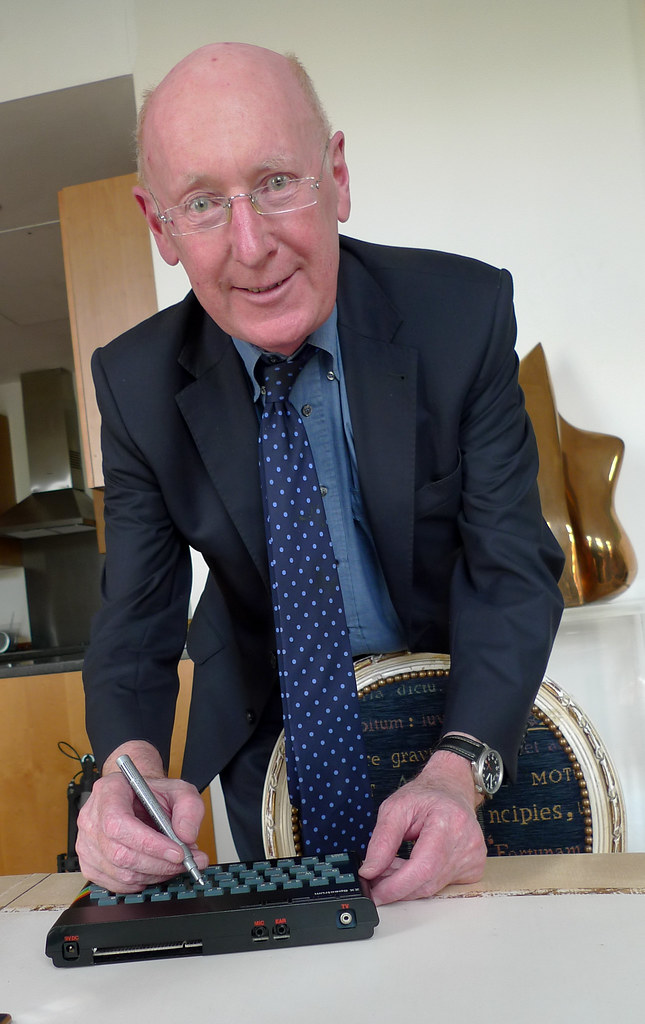 Sir Clive Sinclair, once famous as a boffin who changed the UK computer industry, died on September 16th, aged 81. Let’s consider his legacy and recall the revolution he sparked.

Back in 1984, the TV series Spitting Image ran a sketch based on Sir Clive Sinclair. Apologies in advance; this is from memory; a Google search drew a blank. It went along these lines:

Sinclair puppet: “We have developed the world’s first-ever silicon penis. It is a hundredth the size of a human penis and 1,000 times more effective; the only problem with it is that it takes nine months to ‘c*m*.”

That was the heyday of Sinclair; popular culture saw him as a flawed genius, a man who created miracles of technology but who couldn’t keep to a delivery timetable.

The critique may or may not have been fair. At the time, people used to say he funded the business by selling computers mail-order via ads in newspapers and magazines and manufacturing them once the money was received.

Sometimes it is possible to be too visionary — the ideas might be brilliant, but technology and society must be ready for them.

If that is true, then that is quite ironic because today, the publishing world is like that — many magazines and book publishers print on demand. Indeed, Amazon often arranges the entire process. Maybe 3D printing will make the practice more common across multiple Industries.

Sir Clive was a pioneer in the calculator business. Pocket calculators were one of the earliest examples of an exponential technology— their cost plummeting in a handful of years — from huge great big things that cost an arm and a leg to devices so cheap you could get them in Christmas crackers.

His reputation was somewhat soiled by the Sinclair C5 — a case could be made for saying the Sinclair electric bike thing was about 30 years ahead of its time. There is a lesson in that, sometimes it is possible to be too visionary — the ideas might be brilliant, but technology and society must be ready for them.

Maybe his most costly error was the Sinclair Quantum Leap or QL, which leapt so far ahead of the state of the art technology of that time that no one noticed it!  The QL did to computers what the Austin Allegro did for cars.

But maybe Sir Clive’s biggest problem was that he was British, operating in a country where innovation and entrepreneurship were seen as anathemas by banks and other financial institutions.

With his computers, the ZX80, ZX81 and Spectrum, Sinclair helped create an industry.

The Spectrum was nothing if not idiosyncratic. It had this weird rubber keyboard about as easy to type on as ice — but that was okay as it spawned a market in keyboards for the Spectrum.

The software was loaded via cassette tapes — it was a hit and miss affair; you had to hold the cassette to your ear to confirm it was loading correctly.

The sound was more like little beeps — you didn’t so much get music or sound effects as an impression — you had you use your imagination.

And the computer hype of that time promised that its owners would be able to manage their household accounts on their machine, store recipes and do all sorts of clever stuff. One company even marketed business software. And some of the software tools were extraordinary given the limitation of the hardware — 3D Art Studio, developed by Oxford Computer Publishing and marketed by BT subsidiary Rainbird Software was a masterpiece.

But it was games that provided by far and away the main motivation to own a computer. Maybe parents were conned ever so slightly by a tacit pact between the marketeers and the kids who used the machines. The marketing folk trumpeted the educational value, the kids told their parents how a computer would help them do their homework — but all they really wanted was to play games.

The industry that resulted was dynamic and competitive — it was entrepreneurship at its most raw, as hundreds of little companies, many operating from garages and bedrooms, sprung up.

We also saw a kind of snobbery — professional programmers or systems analysts looked down their noses at home computer programmers —many of whom were kids, writing software ‘when they should have been doing their homework!’

But some of the old school professional programmers migrated to games programming — not always successfully. Their technical skills were not as superior as they thought, and maybe they couldn’t match the kid programmers for creativity.

The barriers to entry for new software companies were tiny, and that created a problem. In 1983 and early 1984, the media were full of tales of computer programmers driving around in Porches. The most famous of these ‘kid programmers’ was Eugene Evans, who co-founded Imagine Software. Flushed with success and maybe believing its own hype, the company spent its way to bankruptcy, folding in 1984.

At that time, too many software houses chased too few customers, and the UK computer games industry fell into recession.

The mainstream media — as it so often does — misread the signals. Instead, it concluded that computer games were just a fad.

But the industry itself saw an explosion in media titles — from EMAP’s Computer and Video Games and its rival VNU’s Personal Computer Games (at one point edited by Chris Anderson who went on to launch Future Publishing and then TED) and Computer Gamer from Argus Press to weekly publications like Popular Computer Weekly. But it was the machine-specific titles that began to gain popularity. There was Sinclair User (EMAP), Your Spectrum (Dennis Publishing) and the magazine that for a few years dominated the industry — Crash Micro from Ludlow based Newsfield Publications. If a Spectrum game was reviewed in Crash and got a score over 90 per cent, it was a Crash Smash — an accolade that was sufficient to guarantee it would be a hit.

Spectrum games reached new heights of creativity and programming excellence with titles such as Jet Set Willy — known as a Platform Game, programmed by Matthew Smith.

There were technical issues with the Spectrum, namely that it had no dedicated hardware for graphics. One issue that resulted was ‘colour clash.’ This article explains the problem well; I quote: “When moving sprites with different colour information around the screen to an underlying character block, colours of either the character bloc or the sprite will be changed to match each other.”

One company got around the problem with spectacular results. When Ultimate Play the Game developed a game called Knight Lore, a three-dimensional adventure game, they overcame the problem of colour clashing by designing the game in monochrome and using the lack of colour as a feature, creating a game oozing in atmosphere.

The creativity of that period was stunning —one company centred its games around Llamas. Llamasoft, founded by Jeff Minter, and ran from a remote part of Wales, with Llamas grazing outside, had a string of hits, including ‘Attack of the Mutant Camels,’ and ‘Sheep in Space.’

But there was a peculiar characteristic of the computer industry of that time, especially in the early 1980s. Magazines used to print computer code, and the kids who read the magazines typed it in, creating games they had programmed.

Just as some chefs began life cooking from recipes, many of the consumers of these magazines, who diligently typed in code, became accomplished programmers, some even brilliant coders.

In this way, a generation of software craftspeople was created — very bright people, many of whom didn’t go to university who helped revolutionise software.

And of course, computer games programming led to other things.  For example, Psion, one of the pioneers in personal device organisers (PDAs), the forerunners of smartphones, began as a computer games company.

Maybe the most spectacular example of a Spectrum playing child who went on to help change the world, building upon the expertise he gained from coding on a Spectrum, is Demis Hassabis — who later co-founded DeepMind and arguably is doing more to advance AI than anyone else on this planet.

Keeping to the theme of famous fans of the Spectrum, Elon Musk said: “RIP, Sir Sinclair. I loved that computer.”

But the Sinclair Spectrum wasn’t the only home computer of its era. There was, for example, the Dragon 32 and, a few years later, the Enterprise.

From the US, the Commodore 64, with its superior graphics and sound, represented formidable competition

But in the UK, the main rival to Sir Clive Sinclair’s company was provided by Acorn.

Whilst the Spectrum was mainly about games, Acorn, with the BBC Micro and later the Electron and much later the 32bit Archimedes dominated the educational market.

Except for Elite, perhaps the greatest game of that era, which was initially designed for the BBC Micro.

There is an interesting divide here between Acorn and Sinclair ecosystems. It is often said that kids brought up on Spectrums often became software experts, those brought up on Acorn specialised in hardware. It is not a hard and fast rule; of course; the majority of users of these home computers became neither software nor hardware engineers.

But maybe it is no coincidence that the origins of DeepMind can be traced back to programming on a Spectrum, while the UK’s other great tech, ARM, was partially founded by ex Acorn people.

Yet, in the era of the 48K Spectrum, Commodore 64 and BBC Micro, the home computer market was tiny.

The industry needed new superior hardware so it could create more sophisticated games. The Atari ST and Commodore Amiga were supposed to provide that opportunity. But by the early 1990s, things changed. If you wanted a computer for serious purposes, you got a PC, which had plummeted in cost by then. If you wanted to play games, you got a Nintendo or a Sega and a later, a Sony PlayStation or Microsoft XBOX. As hardware advanced, so did games.

In the 1980s, some computer games were licensed from movies. Today it is often the other way around. Video games have spawned movies. The industry no longer consists of a huge number of tiny companies, barriers to entry are high, the cost of developing a game is enormous (back in the 1980s, games developers were typically paid around £5,000 plus royalties that rarely resulted.)  As hardware advanced and games saw graphics become ever more realistic, the computer games industry grew massively.

In 1985, cynics said there was no future in computer games that the industry was overhyped and yesterday’s news.

They were proven wrong — spectacularly so.

Today technology cynics say much the same thing about AI, autonomous cars and renewable energy. The mistake computer games cynics made in the mid-1980s was to take a static view; they failed to grasp how an exponentially advancing technology would change things.

Sir Clive’s Sinclair’s impact was enormous; the computer industry would have happened without him, but whether the UK would have emerged as a centre of software expertise without him is not so certain.