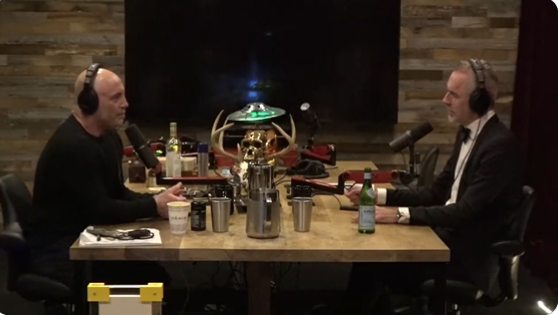 Singer, Neil Young and now climate change advocates lay into Joe Rogen, following an anti-vaccine interview and then an interview with Jordan Peterson.

So that's a count of two: anti-vax and climate change.

To be honest, I wouldn't want to be thrown into a debate with Jordan Peterson. He is a superb debater and would run rings around me…except that is when it comes to climate change. Get Jordan Peterson on the topic of climate change, and all his shortcomings are exposed for all to see. The gist of his argument seems to be that even if climate change is real, it is not practical to do anything about it.

Well, wrong on that count — the renewable revolution is giving humanity an opportunity to defeat climate change and create cheaper energy in the long run whilst we are at it. And, oh yes, wrong on the first count, I mean "if," really?

In an interview with Joe Rogen, Peterson even seemed to question the definition of climate — "there's no such thing as climate" he and that "climate and everything are the same word."

Meanwhile, singer Neil Young has told Spotify to choose between him and Joe Rogan after the infamous host interviewed an infectious disease specialist who opposes Covid-19 vaccines for children.

Young said: "They can have Rogan or Young. Not both." And so Spotify, which forked out $100m — apparently — for the Joe Rogen Experience, said: "bye bye to Young."

As for the Jordan Peterson interview, Peterson argued that more people died from solar than nuclear — falling off roofs installing solar cables. It would be interesting to find the data behind that claim.

As an aside, why do so many climate change cynics wax lyrical about nuclear and pour scorn on renewables?

The Independent quoted climate change scientist Michael Mann saying: "As I understand Jordan Peterson's argument, it's, 'The climate is complicated."

He added: "[Peterson's] argument betrays either a total lack of understanding of how science works or, more likely, a total disdain for his audience and an intention to disinform. It could be used to dismiss physics, chemistry, biology, and every other field of science where one formulates, and rigorously tests – the part Peterson conveniently ignores – conceptual models that attempt to distil the key components of a particular system and the interactions between those components."

Populism, it seems, is clashing with science. There is nothing wrong with asking questions, but if you interview an anti-vaxxer, isn't it important to put the other side of the argument forward? Likewise, by all means, let Jordan Peterson say his stuff, but respond with a robust argument venturing the alternative point of view.

The Joe Rogen experience is said to have been downloaded 200 million times a month. Good for Joe, but what is worrying is how many of those listeners sit down and try to understand the counter-arguments. To be fair, Rogan does explore areas that most 'mainstream' interviewers are even more partisan about and does so with a level of genuine interest in the topic. However, he sometimes seems too drawn into the point of view being offered, rather than pushing a few buttons to offer a counterweight.

As Spider-Man's uncle said: "With great power comes responsibility." Because of the scale of his audience and that he's quite deft hand at martial arts himself, Joe Rogan has great power; maybe it is time to exercise some responsibility.

But there is more to this. Our soul is on the line — America's soul, humanity's soul.

For all its faults, the BBC tries to exercise balance and, in so doing, creates a high bar for its competitors to match. They say who needs the BBC when we have Netflix. Who needs the Today Programme when we have Joe Rogan? The answer should now be apparent.