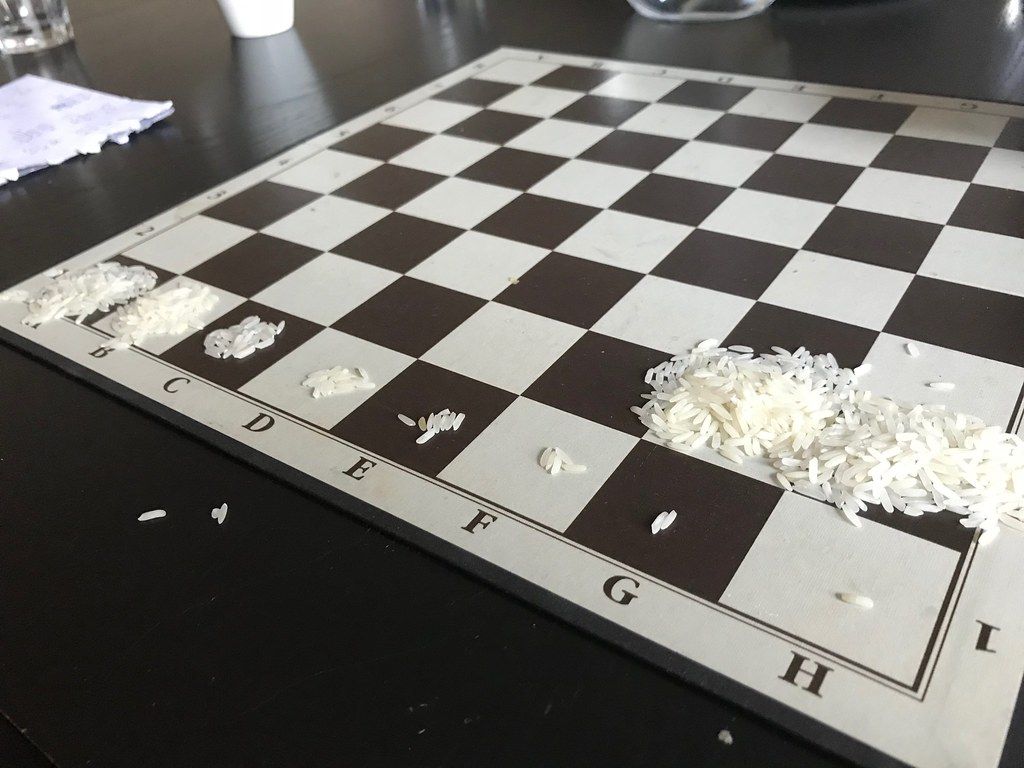 Moore's Law is back thanks to a graphene-based integrated circuit, but Moore's Law, in a broader sense, is about to get interesting….very interesting.

See it this way. Put a grain of rice on the first square of a metaphorical chessboard (it has to be metaphorical because no real chess board would be big enough). Put two grains on the second, four on the third, doubling with each square. By the end of row eight, you would have 128 grains, and by the end of row two, you would have 32,000. But at the end of the board, you would have roughly 32 quintillion (a quintillion is million trillion) grains. Introduce a second chessboard, then a third and keep adding chessboards. By the middle of chessboard five, you would need a square the size of the universe to hold all the grains of rice. (If you don't believe us do the maths.)

And by the way, Amara's Law could explain the dot-com boom and bust and subsequent technology boom. We expected the internet to change the world linearly, so dot-coms boomed in the late '90s. Things didn't live up to the potential, so we saw a crash. Twenty years later, the internet really has changed the world, and the initial dot-com hype now seems justified.

Take as an example renewables; the IEA (International Energy Agency) has underestimated the speed with which renewables' share of the energy mix will increase every time it has made forecasts since the year 2000. Why is this? Because it applies an analysis based on the assumption that the cost of energy generated from renewables will follow following a linear trajectory; when in fact it has fallen exponentially— with implications that people fail to grasp, time and time again.

Towards the end of the last decade, Moore's Law appeared to come to an end. This is why we saw the popularity of specialist chipsets take off. This is the main reason, for example, that Nvidia's market cap increased from roughly $10 billion in 2010 to $688 at the time of writing. (In fact, in November 2021, Nvidia's market cap was around $840 billion).

Now, not only does it seem as if Moore's Law is remerging , there are reasons to think other similar versions of Moore's Law are roaring to life.

Traditional Moore's Law is back

According to a paper from Tsinghua University in Shanghai, researchers have built a 0.34 nanometers (nm) wide transistor gate. In case you were wondering, 0.34 nanometres is less than a billionth of a metre. and the size of a carbon atom.

The technology combines silicon dioxide with a sheet of graphene and a layer of aluminium oxide.

It is the incorporation of graphene which makes this so exciting. Graphene was first isolated in 2004; at the time, we were told it would change the world, but so far, this hasn't happened. However the cost of making graphene has fallen exponentially. We made the mistake of applying linear thinking to how graphene would be applied. As a result, we got all excited, and the graphene hype machine began. That excitement turned to disappointment.

But now, we see real-world applications of graphene, such as 'concretene' — concrete reinforced by graphene.

What are the implications? They are significant; and will create applications for computers that aren't currently realistic.

The researchers also caution that it might not be possible to go any smaller. One of the researchers, Tian-Ling Ren, said "This could be the last node for Moore's Law." IEEE Spectrum helps explain why.

According to Jaime Sevilla Molina  at the University of Aberdeen, computational power in AI machines has doubled every six months over the last ten years.

And why? Because of one of the Techopian's favourite words — Convergence. With AI, we have seen convergence of the following:

Add to the mix advanced parallel computing, and you get extraordinary rapid advances in AI, such as DeepMind applying AI to crack protein folding.

Meanwhile, over at the next paradigm, Quantum computing, often applying graphene, continues to advance.

Researchers in Japan, from NTT Corporation, the Tokyo University, and the RIKEN research centre, reckon they have come up with a photonic answer to quantum: using light rather than electronic circuits to process information.

The researchers say that their solution creates the potential to make quantum computers that do not need to operate at below zero temperatures. They also say that their technology can "easily increase the number of qubits on the time axis without increasing the size of the equipment."

Then think of Moore's Law as a metaphor, call it metaphorical Moore's Law, and the comparison with genome sequencing is apt.

In December 2007, while giving the annual Richard Dimbleby Lecture for the BBC, Craig Venter, a man whose contribution to science is so significant that in 2007 Time Magazine included him in the list of the world's 100 most influential people, applied the idea of Moore's Law to genomics.

And what a story he told.  It began in 1955 when Fred Sanger of Cambridge University determined the sequence of the protein insulin. Then we had to wait 21 years before the next big leap, the decoding of the two of the first two viral genomes. According to Venter, it was then another 18 years before we had learnt how to decode the first genome of a living organism— Haemophilus influenzae, the living organism bacteria that cause infections and meningitis in children. Incredibly the gene is 1.8 million letters of genetic code, meaning it was 300 times the size of the first viral genomes.

Since then, the rate of change has continued to accelerate.

Venter said: "Over a short period of time, genome projects which ten years ago required several years to complete, now take only days. Within five years, it will be commonplace to have your genome sequenced, something just a decade ago that required billions of pounds and was considered a monumental achievement. Our ability to read the genetic code is changing even faster than the change predicted by Moores's Law."

So why do we tell that story? The human genome project took around ten years and cost $2.7 billion. Thanks to advances in technology, it resulted in the first sequencing of a human genome, although it cost less and took less time than initially projected.

A team of researchers led by Dr Euan Ashley, professor of medicine, genetics and biomedical data science at Stanford School of Medicine, in collaboration with researchers from Nvidia, have managed to apply AI techniques to sequence a human genome in five hours.

Dr Euan Ashley said: "It was just one of those amazing moments where the right people suddenly came together to achieve something amazing."

The breakthrough has earned the team a place in the Guinness Book of Records.

And it will change the world.