The Techopian view: a mini technological singularity set for 2027 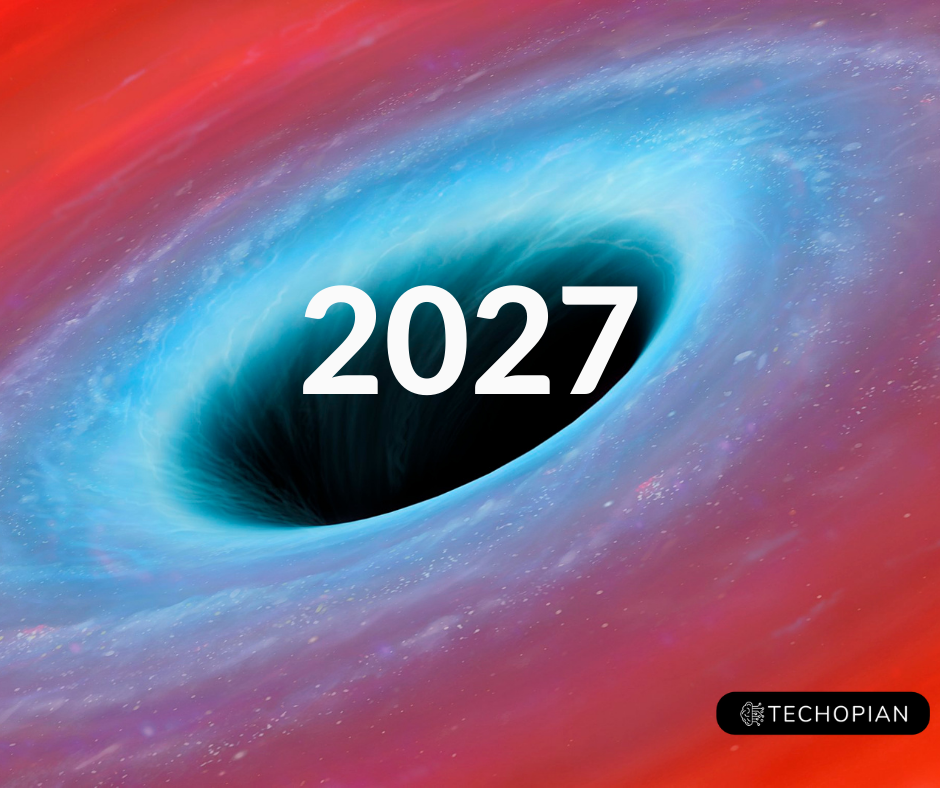 A mini-technological singularity resulting in the rapid development of immersive reality and electric vehicles will probably occur around 2027.

What is a technological singularity?

Wikipedia describes technological singularity as: "A hypothetical point in time at which technological growth becomes uncontrollable and irreversible, resulting in unforeseeable changes to human civilisation."

Maybe technological singularity will occur as a result of quantum computing converging with optoelectronics, see:

Optoelectronics and quantum computing may lead to artificial 'general intelligence'.

The implications of technological singularity as described by Kurzweil are as profound as you can imagine, but whether such a point is really just two and a half decades away is open to discussion.

But the Techopian view is that mini singularities have already occurred. The internet, from ARPANET, the definition of HTML and then broadband all represented vital moments when the internet's impact on the world became an order of magnitude more significant and in an incredibly short period.

A mini singularity occurred around 2007 with the introduction of a touchscreen smartphone — within a few years, smartphones changed the world.

2027, plus or minus two years, will see several mini technological singularities — but because they will occur so close to each other, we could perhaps lump them together.

Drivers of these mini technological singularities will include advances in lithium-ion batteries, traditional silicon chips and maybe quantum computers. In each case, they will pass a tipping point. Before the tipping point, technology is important; after the point, it is world-changing.

Take as an example IBM's recent announcement that it has worked out how to create a two-nanometre chip.  A nanometre is one-millionth of a millimetre. In the context of a chip, nanometres relate to the distance between individual transistors. The IBM chip will contain 50 billion transistors on a space the size of a fingernail. The current state of the art is seven nanometres. The IBM chip will result in more energy efficiency and greater processing capability.

It says that the chip will lead to phones that will only need re-charging every four days.

As a rule, new apps develop to fulfil the potential created by a new technology. Batteries lasting 96 hours is perhaps less likely than new applications that are more processor and thus energy intensive.

But consider the implications:

Take immersive reality — this technology could transform the way we communicate, creating hologram to hologram communication such that we could communicate with someone a thousand miles away as if they are sitting next to us. Remote working will be transformed, the way we socialise could be transformed, and in combination with real-time voice translation, cultural barriers could be all but eliminated. The changes will be profound indeed. The technology isn't quite up to the task yet. However, computers with two-nanometre chips combined with 5G may well take us past this tipping point, creating an immersive reality singularity.

The two-nanometre chip could give smartphones greater AI capabilities, maybe creating 'always with us' personal assistants — another type of singularity.

A recent report from Bloomberg NEF predicts that electric vehicles will be cheaper than internal combustion engine vehicles by 2027.  This tipping point will be reached because of the combination of:

Strictly speaking, even today, when you factor in the cost of fuelling a traditional car with re-charging an electric vehicle, then electric vehicles often work out cheaper to own over their lifetime.

But the 2027 date will mark the point when the supremacy of electric vehicles is unambiguous. Why would anyone want to buy an internal combustion engine cars under such circumstances — unless they like burning money?

So 2027 will also see an electric vehicle singularity and we expect the cost or value for money of EVs to happen a couple of years prior to this.

Another singularity may occur that year relates to the Hyperloop.

Josh Giegel, co-founder and chief executive of Virgin Hyperloop, has predicted that the first commercial Hyperloop service will be available in 2027.

Hyperloop, which involves an elevated train propelled using magnets, like Japan's maglev, but also travelling through partial vacuums, offers the prospect of commercial travel at the kind of speeds only currently possible with flight. The company says that passenger pods could travel at 1,200 kilometres an hour, much faster than commercial airplanes.

Of all the new futuristic technologies currently discussed, Hyperloop often feels like the most improbable. And critics love to tell us why it can never work and then say even if it does work, (which it won't), it will be super-expensive so that only elites will use it (think Concord). But maybe we should see Hyperloop as a technology litmus test. If this really can become commercially viable later this decade, then it would leave the Techopian open-mouthed in wonder and more willing to believe some of the other extreme promises — like super-cheap cultured meat,  brain-computer interfaces, and reversal of ageing.

If Hyperloop really is launched in 2027, then maybe 2045 for full-blown technological singularity is realistic.