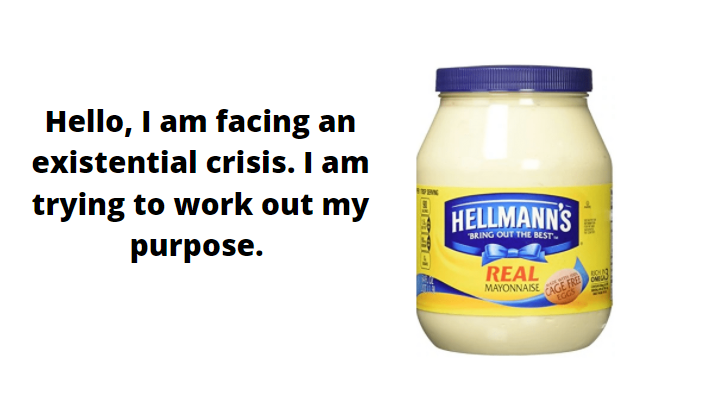 Unilever likes to talk about brands with purpose, but the UK's leading investor slams the very idea. It's all a part of the ESG backlash, but is purpose really so purposeful?

What's the purpose of Hellmann's mayonnaise. Terry Smith, who is a kind of British Warren Buffett, reckons he knows. In his recent annual letter, he ventured the idea that its purpose has something to do with sandwiches and salads.

Unilever, a big advocate of ESG, and the company behind Hellman's has other ideas. It says its seven most successful brands — and Hellman's is on the list — are all what it calls Sustainable Living Brands.

So, next time you are out shopping, and think, what to have with your salad? Don't think Hellman's first, think "how about something that supports sustainable living," and then think "Hellman's mayonnaise."

Terry Smith, who manages the Fundsmith platform, which has seen extraordinary returns, is just about the only investor in the UK who sometimes has the prefix 'legendary' attached to his name.

He said: "Unilever seems to be labouring under the weight of a management which is obsessed with publicly displaying sustainability credentials at the expense of focusing on the fundamentals of the business. The most obvious manifestation of this is the public spat it has become embroiled in over the refusal to supply Ben & Jerry's ice cream in the West Bank. However, we think there are far more ludicrous examples which illustrate the problem. A company which feels it has to define the purpose of Hellmann's mayonnaise has in our view clearly lost the plot. The Hellmann's brand has existed since 1913 so we would guess that by now consumers have figured out its purpose (spoiler alert — salads and sandwiches). Although Unilever had by far the worst performance of our consumer staples stocks during the pandemic we continue to hold the shares because we think that its strong brands and distribution will triumph in the end."

So there you have it, worrying about the purpose of Hellman's says you have "clearly lost the plot."

For its part, Unilever says: "In 2018, our 28 Sustainable Living Brands – those taking action to support positive change for people and the planet – grew 69 per cent faster than the rest of our business. That's up from 46 per cent in 2017. They also delivered 75 per cent  of our overall growth."

Of course, correlation doesn't mean causation, but Unilever's CEO Alan Jope said: "The fantastic work done by brands such as Dove, Vaseline, Seventh Generation, Ben & Jerry's and Brooke Bond shows the huge impact that brands can have in addressing an environmental or social issue. But talking is not enough; it is critical that brands take action and demonstrate their commitment to making a difference."

So who is right? Jope or Smith?

What we can say is that Alan Jope doesn't lack authenticity; he seems to genuinely believe in ESG.

The challenge for Jope is that not all shareholders agree. Recently, activist shareholder Nelson Peltz took a stake in Unilever. And he has a purpose alright — making money, or at least his standing as the 432nd-richest person in the US suggests that.

And Unilever is under pressure to change — to sell-off certain assets, after its failed attempt to buy the consumer healthcare bit of GlaxoSmithKline.

So Jope has one approach, but not all shareholders share his purpose.

A recent survey from EY uncovered resistance to ESG and sustainability amongst shareholders. It found that 65 per cent of respondents admit that they have encountered resistance from investors and shareholders about their sustainability transition strategy, and almost a quarter (21 per cent) say that investors are not showing support for long-term investment plans or that they are fixated on quarterly earnings."

So what's going on?

ESG advocates tell us that you must embrace ESG or feel the wrath of shareholders, but the evidence from the non-sustainable coal face, by which I mean some Unilever shareholders, is to the contrary.

What we are seeing at Unilever, which for many is an ESG poster-boy, is important. We are seeing a clash between ESG thinking and old-school thinking.

But the times they are a changin'.

Climate change is real; Covid is real, and so are staff shortages.

If you believe climate change poses an existential threat to humanity, if you believe that the evidence of climate change will mount over the next few years, unfortunately claiming lives, then public pressure leading to regulator's pressure on companies to change, will become irresistible.

Meanwhile, as labour shortages persist, companies with a clearly defined purpose that chimes with the wishes of a labour force, partly disillusioned by Covid and lockdowns, will have the advantage.

It is also about ecosystems — this is important. Ecosystems take time to form. Suppose, say, in six years; regulators impose ESG rules upon companies. In that case, the companies that have created ecosystems around their supply chain and distribution network supporting ESG will have the advantage.

Investors can be subject to regression to the mean. Before Terry Smith, UK's Warren Buffet was said to be Neil Woodford — the man with the Midas touch, but his credibility went up in smoke.

Maybe old school thinking is no longer fit for the age, or maybe we will see another type of regression to the mean and ESG will take a back seat to the profit motive. We really hope not, future generations will not thank us for having one more supercar or another house on a beach.