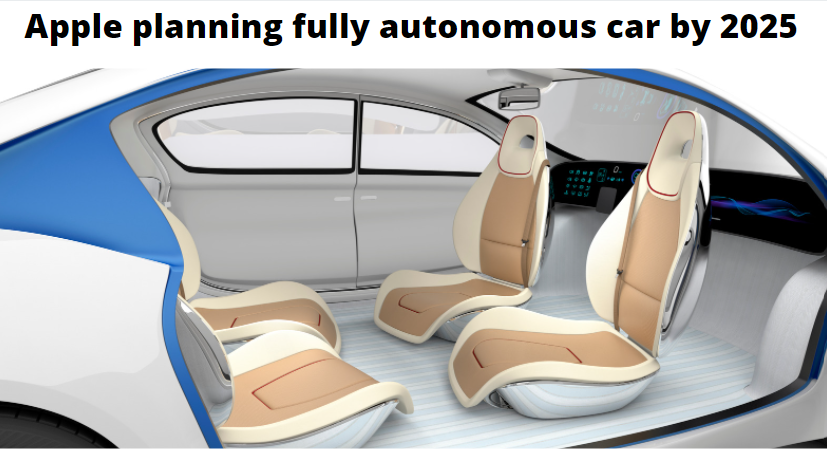 Following a report predicting autonomous cars will be safer than traditional cars by 2024, Apple is said to be releasing an autonomous car in 2025.

Is the end of the steering wheel nigh? It is difficult to overstate how significant fully autonomous cars will be. Their impact on the global economy could be even more significant than the move to working from home.  Cruise (a part of GM) have been at it, and now it seems Apple is joining the fray.

According to a report on Bloomberg,  Apple is planning to launch a fully autonomous car, possibly with a U shaped passenger seating arrangement, in 2025.

According to the report, Apple has made a breakthrough with the chip it plans to use to enable self-driving.

The Apple autonomous car project — known as Project Titan — has been shrouded in secrecy, but it has had its fair share of problems, with the person previously in charge of the project, Doug Field leaving the Apple fold to join Ford. According to Bloomberg, Field’s replacement Kevin Lynch is pushing the Apple project for its 2025 release date.

Not a proprietary car

We don’t know an awful lot about Project Titan — any more than we knew much about the iPhone before its 2007 announcement — but talk is that Apple is planning to license its technology to other car companies rather than market an autonomous car itself.

If Apple does indeed go down the licensing route, it will mark a curious about-turn in the Apple versus Alphabet approach. So in one corner, you would have Mr Proprietary itself, Apple, pushing autonomous cars via the licensing of its technology; in the other corner, you have the company behind the Android developing a proprietary autonomous car. In 2018 rumours suggested Apple was working with Volkswagen on an autonomous employee shuttle van.

Safety of autonomous cars is a crucial tipping point

Of course, for fully autonomous cars to become viable, the public must be certain they are safe.

In recent months, a spat of reports have suggested that the autonomous cars dream isn’t viable; that they will never safer than cars driven by humans as AI lacks common sense.

Maybe, however, the real issue is an unrealistic view of how clever humans are, or not.

According to James Jeffs from EDTechEx, during the testing of autonomous cars, the miles driven between disengagements — when the safety car takes over from the autonomous features — has been doubling every year since 2015. If this rate continues, autonomous cars will be as safe as cars driven by humans by 2024. And considering not all disengagements occurred when the car was about to crash, this point of parity might even occur in 2023.

If an autonomous car crashes, the press will be all over it — they are not safe, they will claim, and the public discourse, underpinned by our own human-centric bias — will react against cars driven by machines.

But as Waymo states on its website, there are 1.35 million deaths worldwide due to vehicle crashes; 36,096 deaths in the US in 2019 and 94 per cent of those deaths are caused by human error.

With autonomous cars, the public may not be appeased until the data shows that cars driven by robots are at least twice as safe as cars driven by people.  James Jeffs argues that if the exponential rate of falling disengagements continues, this tipping point will occur in 2025, the year the Apple car is said to be ready.

The main issues that could hold up the dominance of autonomous cars are:

Circumstances are almost perfect for the rapid take-up of autonomous cars, and the reason lies with electric vehicles. Electric vehicles are much cheaper to run than internal combustion engine (ICE) cars.  Robo-taxis will be so much cheaper than current taxis that many car owners will find it is cheaper to order a robo-taxi than drive the car they already own.  The replacement of ICE cars may be much faster than is generally assumed. Existing EV lenders might be slower to adopt autonomous cars and order robo-taxis.

The other issue with autonomous cars — their reliability in hazardous conditions — might be a bigger issue.

On the other hand, we need to ask how safe human drivers are in hazardous conditions?  Sure, Autonomous cars may infuriate human drivers with their caution in severe rain or mist; but maybe the issue here is the stupidity of humans rather than the failings of autonomous cars.

For one thing, the world will be quieter; for another thing, the air quality near roads will improve.

And if the majority of autonomous cars are robo-taxis, then fewer cars will be required to meet our needs. As a result, a huge proportion of existing car parks, car parking spaces, drives and garages will become superfluous — although roads themselves may not necessarily become less crowded — we will have to await flying cars/passenger drones or VTOL (vertical take-off landing) vehicles for that.