Activision boss gives himself $200m bonus while laying off staff 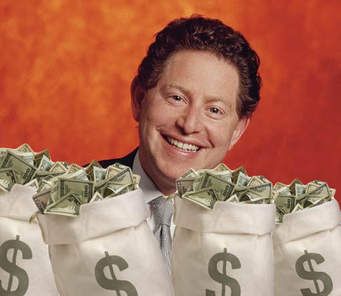 Bobby Kotick the CEO of the gaming company Activision Blizzard thinks it's fine to pay himself a $200m 'performance bonus' while at the same time laying of 50 of the company's staff in Europe.

Here at Techopian we are normally focused on highlighting the good things that companies are doing, in line with the expected ethical behaviours we see as critical for long term growth and sustainability. However, every now and again we come across stories that are just too unbelievable to ignore, and this one deserves further discussion. Especially as it highlights one of the major issues we have in the growing wealth disparities between staff and executives.

For those of you who are not aware, Activision is maker of online video games. They are responsible for such blockbuster titles as World of Warcraft, Guitar Hero and Call of Duty. Kotick paid $500k for the company in 1991 when it was in difficulty and managed to turn around the struggling software business through financing and restructuring. A job well done as the company now boasts a worth of over $20bn.

That's is a lot of money, the company posted a net income of $2.2 billion on $8.1 billion of revenue during 2020, no doubt as a result of many more 'big kids' being locked down with not much else to do. This is where questions need to be asked though, especially given the amount of unsatisfied customers they have, largely due to a lack of support and rehashing of past titles. You would think that a company that makes this kind of money would at least be able to support its customers and look after its staff (who incidentally are the very people who do the actual work).

While all of these challenges and successes are nothing knew, we see a lot of companies in the tech sector with huge disparities between average pay and executive pay (up to 100x in numerous cases - a quick search will unveil the bizarre realities of this statement), the question needs to be asked ... what do people such as Bobby Kotick do that is 100 times more valuable than the other people building the business on the proverbial coalface?

Of course, the question of how they manage to sleep at night while making people redundant and filling their bank account with more  money than they will need for generations,  is a question that goes beyond the unethical. Kotick is obviously a clever man, he took a struggling company and turned it into a profitable business but we all know that he did not do this alone, he did it through the hard work and dedication of employees and hard earned cash from investors.

These same investors are now asking these same questions themselves.

A recent report by CtW Investment Group, which highlights ‘irresponsible and unethical corporate behaviour and excessive executive pay’ has begun to investigate Kotick's behaviour. As more investment houses begin to align themselves to sustainability will we begin to see the levelling of the playing field when it comes to pay and bonuses?

If we take this example and redistribute the $200m amongst the 9500 staff at Activision, each would receive a bonus of $21,000. Or even increase the staff compliment to ensure that it's customers are better served. Would that not be a better use of the spare cash that the CEO seems to have found for himself?
Now it's obviously not as a clear cut as that but as the world begins to realise that the majority are being short changed and the move towards more responsible businesses rises, the more highly skilled will naturally gravitate to the more rewarding organisations. Without good people any company will fail.

Sustainability pays in the long run, it's better for everyone involved and leaves the world in a better place than we found it, but you have to give a damn I guess.