Tesla versus Metaverse: the regal monarch versus naked emperor 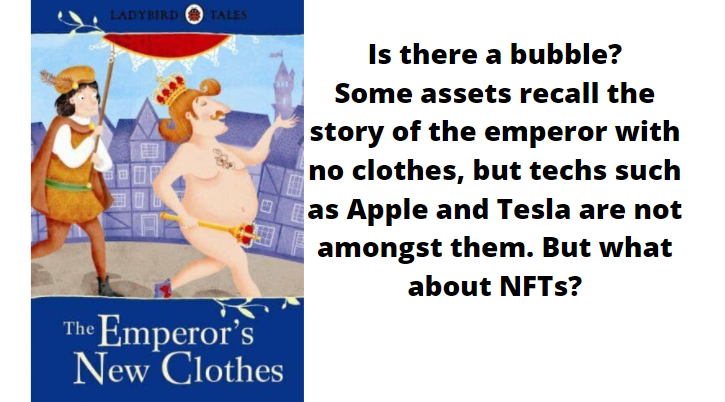 Bubble watchers see madness everywhere, but it isn't — Tesla isn't a bubble stock but Metaverse real estate might be.

When the emperor wore no clothes, it just took one child to point it out. Reality is not like that. Plenty of people can point at a bubble and be ignored. But the true nakedness of an idea becomes revealed eventually. The trouble right now is superb ideas are rubbing shoulders with non-sensical ideas. It is like that Pink Floyd song — "so you think you can tell, Heaven from hell". So you think you can tell, hot bubbles from cold steel reality.

Let's take property in the Metaverse. Sure I would love to live in a villa by a sunny beach, but the reason why this kind of real estate has value is that it is scarce. It seems almost cliched to cite Mark Twain when he said buy land they don't make it anymore. That is the rationale for investing in real estate. Unfortunately I have some news; it turns out you can make virtual real estate ad infinitum. So we create non-fungible tokens (NFTs) to create scarcity. But it is an artificial scarcity. The limit to the creation of our home in the Metaverse is our imagination. Unless they stop making that, we can carry on making virtual real estate. And from there where we 'teleport' anywhere we like into the Metaverse.

Economics is the study of scarcity — there is no scarcity in the Metaverse, so we create it. But why invent scarcity? Economic theory also says price is a function of marginal cost — and marginal cost in the Metaverse is virtually zero (zero + cost of electricity to process algorithms.)  So we invent NFTs — a kind of artificial scarcity. But why? Is it to ensure there is always a divide between rich and poor? I have never lived in a hippy commune, and the idealism behind such a concept may not hold up in the real world, where the harsh realities of scarcity get in the way. "It is a good idea in theory," I was told, "but it isn't practical."

In the Metaverse, it is practical, so what do we do? We try to monetise everything that should be free. In the real world, we can at least breathe air and look out of our eyes at a beautiful view or at nature or architecture for free. Is the idea behind NFTs that we can't even do that? I am tempted to conclude that the emperor that is NFTs wears no clothes.

I am not alone in thinking the above. But those who see a bubble in the Metaverse and maybe see one with cryptocurrency also lump techs stocks like Tesla or Apple into that bracket.

I write these words soon after both Tesla and Apple have revealed stunning results. Tesla's profits came in at $5.5 billion last year, compared with $3.47 billion last year. And why? Because Tesla is rather good at solving problems — in its case, the problem of travelling from A to B while simultaneously trying to limit your carbon footprint.

Sure, the markets value the company at more than 150 times last year's profits, which might feel steep, but that is because Tesla profits are expected to grow rapidly. They are not expected to grow rapidly because of some BS reason; instead, it is because the company's track record supports this. So, for that matter, does cold analysis of its business.

Take this excellent Twitter thread — the conclusion: Tesla is safely heading towards 40-50 per cent cash return on operating assets; and that within one of the biggest industries there is (automobiles.)

Or take this piece in Bloomberg. The key takeaway — "Elon Musk says the Optimus Human-Robot is the most important thing Tesla will be working on this year and has 'the potential to be more significant' than its car business."  What is the Optimus Human-Robot? It is a name used internally within Tesla for its bot used in manufacturing. This is a product that helps solve a problem — in this case, making cars more efficiently, which is especially useful in times of a labour shortage.

Or take claims from Elon Musk that Tesla will achieve full self-driving cars this year. Critics say that Musk says that every year, but I don't think that's right. He may talk about self-driving every year, but I don't think he has ever claimed it is less than 12-months off. He once claimed Tesla would be making five thousand cars a week by a certain date, and critics said it was impossible. In fact, he was off by a couple of months. I don't think that is bad, being two months late meeting an impossible target. So what if Tesla self-driving cars won't be delivered this year but are, in fact, delivered in 2023 or 2024? That would still be remarkable.

And what problem would self-driving cars solve?

Musk said: "Everything pales in comparison to the value of a robo-taxi or full self-driving."

"I mean … it just tends to overwhelm everything. Just going from having an asset that has a utility of … 12 hours a week per passenger car to maybe around 50 or 60 hours a week, so a (five times) increase in the utility of the asset cost and change.

"That's where … it just kind of blows your mind."

And he is right. Self-driving cars represent a way to travel from A to B at a fraction of the current cost. That's the problem they solve.

Or take Apple; the latest results show an 11 per cent increase in sales in the latest quarter, with revenue hitting $123.9bn in just three months. Net quarterly profit was $34.6 billion. Profits were up 20 per cent on last year.

Services accounted for 15.7 per cent of revenue, hitting the highest level ever.

Over the same 12-month period, Apple shares increased around 18 per cent. So profits increased faster than the share price — ergo the surge in the Apple price is not a sign of a bubble, or if it is, the bubble was already formed a year ago.

Why did Apple do so well? Because its products solve a problem — or maybe they solve multiple problems.

Some naked emperors are running around at the moment. But tech stocks like Apple and Tesla aren't amongst them.