Cathie Wood is right about deflation and tech, although she hasn’t got it all right 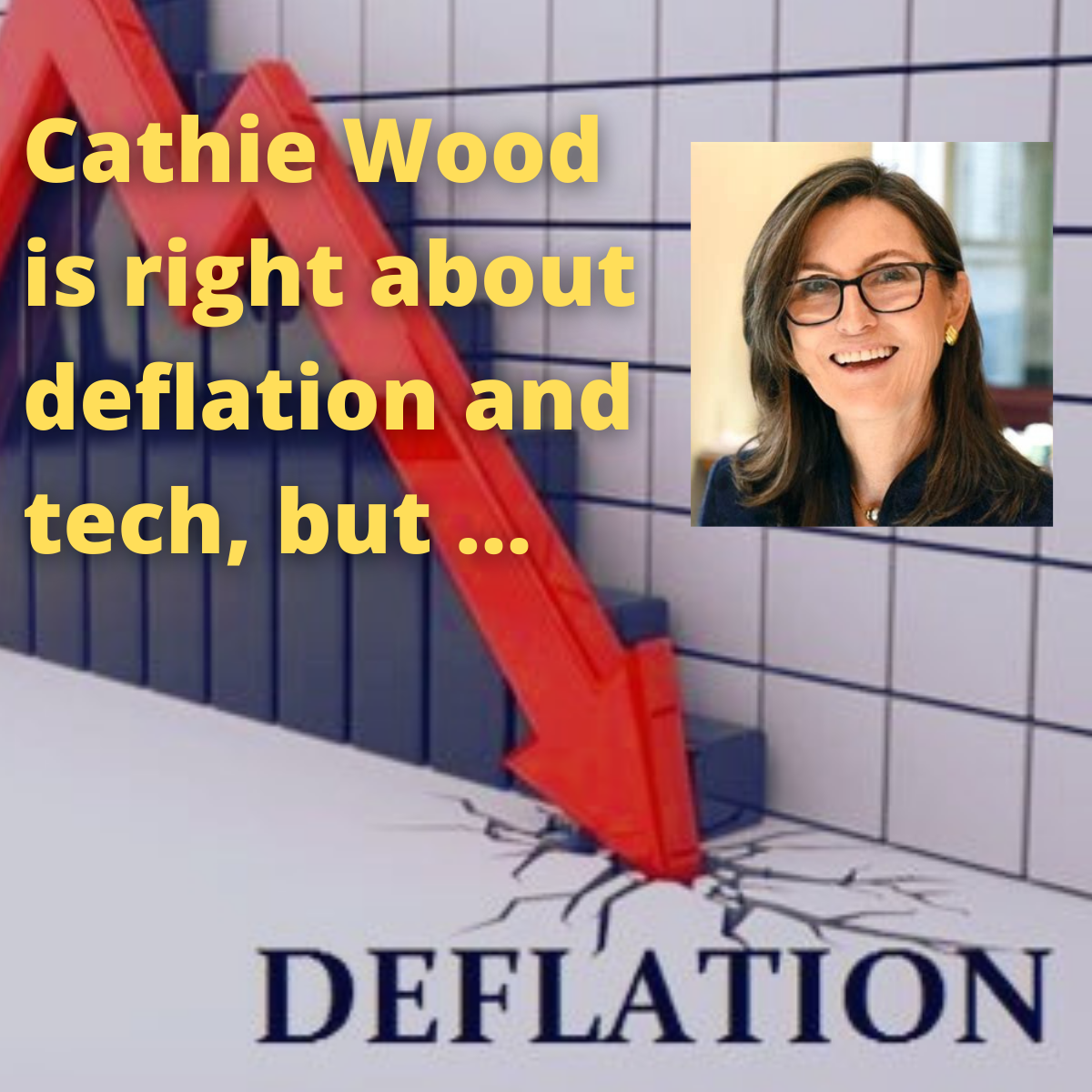 The narrative that inflation is set to surge and that technology represents one big bubble is wrong; Cathie Wood is closer to the mark about deflation and tech, although she hasn’t got it all right.

There is a narrative that the global economy is heading to hell in a handbasket.  Superficial analysis might suggest this narrative is correct, but look deeper, and things look very different.

Cathie Wood at ArkInvest, famous for her support of Tesla and Bitcoin, has a quite different take. I don’t agree with her entirely, I am dubious about Bitcoin, and while I am not a Tesla cynic, I worry about its valuation. however, I do feel that the broad thrust of her analysis is about right. For example, she argues that deflation and not inflation pose the biggest threat to the economy, and I think she has a point, although I think modest inflation is more likely. She also thinks technology is the sector to invest in, and I would agree, but let me qualify what I mean.

The case for inflation

Inflation is up, of course, and is expected to rise further — “The rate of cost inflation was the second-quickest on record,” states IHS Markit in its latest Purchasing Managers Index report tracking US services.

Commodity prices are up; Brent Crude oil price is at $70 a barrel, twice the price during the first wave of Covid.

Government debt is surging around the world; in the US, household debt to GDP is higher than the pre-2008 crash level.

With inflation rising, central bankers will be forced to hike interest rates and then hike them again; debt levels will be unsustainable; the economic crash that follows will make the 2008 crash seem like a mild headache that is gone by breakfast, in comparison. Or so goes the narrative.

The above account is too easy, superficial, and in most parts wrong.

Cathie Wood argues that during lockdowns, spending on goods, that’s consumer durables and nondurables, surged because consumers had nothing else to spend their money on, and this created pressure on commodity prices.  She argues, consumers will switch focus to services, meaning that the commodity boom will soon turn to crash.

Up to a point, I think she is right.

Part of the issue is that planned supply and demand work with time lags. If demand surges, producers struggle to keep up, and they increase prices. But they adjust eventually, so supply then increases, often at just that moment when demand starts to fall. That is why we get commodity cycles — the time lag between changes in the forces that create demand and supply can be several years in duration.

The commodity boom or crash?

Let's look at what is happening now. The price of lumber may have doubled during the first half of this year, but it is now approaching a third of the price seen earlier this year. Okay, lumber is still roughly double the level before Covid, but the trend is what the trend is — and if it continues, by the end of the summer, the lumber price will be all the way back down to pre-Covid level.

As for copper, its price has dropped more than ten per cent over the last few weeks.

Look at bond markets, and you see a picture emerge that is altogether more benign, and the yield on US ten year treasuries has dropped from around 1.75 per cent a couple of months ago to 1.3 per cent, suggesting that the markets are not concerned about inflation.

Much of the gloomy narrative is contradictory — take this video warning about surging levels of government debt.  As you see so often, it warns of surging inflation forcing up higher interest rates and mass unemployment; but it is highly unlikely we will get both. To claim, we will simultaneously see depression levels of unemployment and inflation threatening to become hyperinflation; it is a little like claiming we will have an exceptionally cold summer with temperatures well above average. It makes no sense.

Okay, Germany had hyperinflation and high unemployment in the 1920s, but that was due to the Treaty of Versailles and its isolation from the global economy. Not exactly a typical scenario.

And there is an issue about debt that doesn’t get spelt out often enough. A growing economy underpinned by innovation needs a growing money supply. The way the banking system operates, the mechanism by which the money supply grows, is by debt.  So if you want economic growth, you must have increasing debt — and in the past, this has led to periodic debt bubbles, culminating in what they call a Minsky moment, named after the economist Hyman Minsky who described the phases of the credit cycle.

If, however, the means by which the money supply grows is via government deficits in which the government raises money by selling bonds charging near zero per cent interest, or by borrowing from its central bank, which it owns — meaning it is borrowing from itself — then maybe money supply growth has been achieved without creating a credit bubble.

What the government does with the super-cheap (possibly free) money it borrows depends on its ideology; it can cut taxes, spend money on infrastructure or even introduce negative taxes or universal basic income.

There is no doubt that the western economy has been the recipient of exceptionally high government stimulus; and it is not likely that the resulting debt is sustainable.

This is what I think will happen:

Demographics means that the US and Europe (and indeed China and Russia) have much in common with Japan at the beginning of this decade. Japan saw surging government debt, but this debt was largely funded by the Bank of Japan printing money. Instead of runaway inflation, which people are predicting for the US and Europe, Japan got super-low inflation bordering on deflation.

There is, however, a difference with Japan. The commencement of the demographic crisis in Japan coincided with a different phase in the technology cycle. Japan’s lost decade, which had turned into a lost two decades (or three), began before there was a World Wide Web, before we talked about AI, software automation and the Internet of Things. As for remote working, when the asset bubble burst in Japan, it was ‘remote what?’

Today, automation technologies are so much more advanced than at any time in our history.

Remote work was encouraged along by Covid but made possible by the cloud, fast internet speeds and laptops.

The impact of remote work will be nuanced. It will mean we spend less on travel, on business suits and eating out at lunchtime. Companies will spend less on office overheads.

What happens next will depend on how much of the money we no longer need to spend that we save. If, as a result of remote working, saving rises, that will be deflationary.

If we spend the money in different ways, on locally grown food and local services, for example, we will see a structural change in the economy. However, this shift will lead to bottlenecks as workers who lose their jobs due to the collapse of the office and commuting economy might be slow to fill the new gaps that emerge.

Simultaneously, we will see falling energy costs as renewables and energy storage becomes more efficient, meaning that while the oil price may continue to rise this year and next, it will then crash to extremely low levels. This is a view that Cathie Wood also holds.

The winners from this shift in the economy will be the businesses that already serve local markets, businesses that adjust more quickly, and the companies that provide the tech that makes it all possible.

Technology change continues to accelerate; the economic implications will be far-reaching.

But don’t fall into the trap of assuming a technology-driven economy will be good for Bitcoin. Cathie Wood is a massive Bitcoin fan. She may or may not be right, but I don’t think the fortunes of Bitcoin and technology in general, are related. Many technologists are Bitcoin cynics. I make no inference on whether Bitcoin is a good or bad investment; I just don’t think it is relevant to this narrative.

As for Tesla, I am absolutely not a Tesla cynic. I don’t think Tesla cynics understand its business model — its emphasis on vertical integration, AI, speciality in battery technology and how its future relates to autonomous cars and the transport as a service model that might become dominant at the end of this decade. It is just that I look at its valuation and see limited scope for much more growth.